On the day North Bergen Mayor (state Senator) Nick Sacco filed to run for re-election in next Tuesday’s nonpartisan contest, he hardly looked like a man who expected to do anything other than flatten the opposition, whoever that turned out to be, if anyone.

Standing in a set piece of big white cardboard boxes filled with petitions, stacked to look like a working, life-sized replica of the Alamo in the basement of Town Hall, the mayor promised to knock on doors as if he were in a real race.

If it hasn’t turned into one, at the very least Sacco is really running as if it is, for once they survived the mayor’s initial legal challenge to throw them off the ballot, a little group backed by local liquor store interests and irritated with the mayor over a local development issue proved more than a little irritating to the man himself.

Four years after he ran unopposed for mayor, Sacco finds himself this year – if not in a competitive struggle – at least, by Hudson County power standards, in an unexpectedly uncomfortable race engineered in large part by veteran Passaic County GOP operative Thom Ammirato, who on a daily basis has dredged up the goods on Sacco and company and served them – via Facebook and YouTube mostly -into cyberspace in hopes that some of it sticks locally come Election Day.

Ammirato lays out the facts in his attack. While a publicly phlegmatic executive figure with a following, Sacco’s also a triple dipper wearing a hefty taxpayer price tag between his $220,000 assistant school’s super job, $15,000 mayor’s salary, and another $49,000 for his state Senate gig. Then there are his re-election allies on the commission, three of whom have jobs on the school board and friends and relatives on the payroll.

“He’s one of the last of his line,” Ammirato said of Sacco. “The salaries and the perks add up to a $300,000-plus package that puts him in a league with (former Passaic Valley Sewerage Commission Executive Director) Bryan Christiansen.

“Then again, it’s Hudson County and I don’t know how far it really goes,” Ammirato admitted, up against the reality of a popular machine incumbent, entrenched since the 1980s.

“People may say he’s a nice guy, but they also say it’s time for him to go; I  just don’t think he’s had much scrutiny over the years – there’s not a lot of scrutiny going on there, so we’ve just brought to light certain facts.”

Along the way, the Citizens for Change Team, consisting of businessman Michael Kreutzer and his slate, have enjoyed News 12 and My 9 News coverage of what those media outlets exposed as voter intimidation by city employees of business owners displaying challenger signs in their windows. Ammirato also claims to have identified 2,500 people on the voting rolls who don’t belong there because they are no longer residents of North Bergen. He says he brought the matter to the attention of the state Attorney General’s Office.

Ready for battle, Sacco’s Team nonetheless grimaces when asked about Sacco’s opponent, Kreutzer, the most visible of the bunch.

“This is a guy who registered to vote the day he turned in his petitions,” said Hudson County Democratic Organzation (HCDO) spokesman Paul Swibinski, who said the ticket is little more than liquor store owner Larry Wainstein’s bitterness encapsulated in a team of political neophytes masquerading as grassroots change.

“If North Bergen knuckled under to Wainstein’s demands and blocked a competing liquor store to open, there would be no Citzens for Change,” Swibinski said.

As for the salaries, “Mayor Sacco has been a professional educator long before he got into government; his salary is consistent with the salary guide,” the spokesman added.

“This is a hard-working guy who sponsored the Urban Enterprise Zone law, which facilitated development on West Side Avenue, and enabled the hiring of police officers and the building of bridges and three railroad overpasses to eliminate the traffic problems we had. Nick Sacco doesn’t agree that a person should only be allowed to hold one office.

“The mayor brings a perspective to the state Senate that is very important – he is able to tell legislators to consider the impact legislation would have on local budgets. The fact is that this push for elected officials to hold just one elected office is a popular point of view right now, but that doesn’t mean that it’s right.”

He acknowledged Sacco is working hard this time, putting up between $250,000 and $500,000 against what Ammirato estimates is about a $60,000 Citizens for Change effort.

“Nick is driven,” Swibinski said. “He has been campaigning every single night. There are 39 districts, and every one of those committee people wants him. It’s a little mini celebration every night wherever he goes.”

Swibinski described the video of a Department of Public Works employee bullying a store owner as doctored and inconclusive.

“The videos don’t prove anything,” the spokesman said. “In one, a DPW worker walks into a deli and says something to the store owner and then the video is doctored to make it look like she’s threatened, but if you look at the time codes, it took her an hour and a half to take the sign down.”

But Ammirato said the store’s surveillance camera caught the DPW amployee walking into the store at 917 Grand Ave. and telling the store owner,   Jyostna Patel,  to take down the Citizens campaign signs or, according to Patel: “You are going to have trouble with your business.”

In any event, as he heads toward Tuesday, Sacco’s sign isn’t coming down, as just in case, and in a play to be hip, his campaign this week circulated a campaign rap video that pays homage to the mayor. 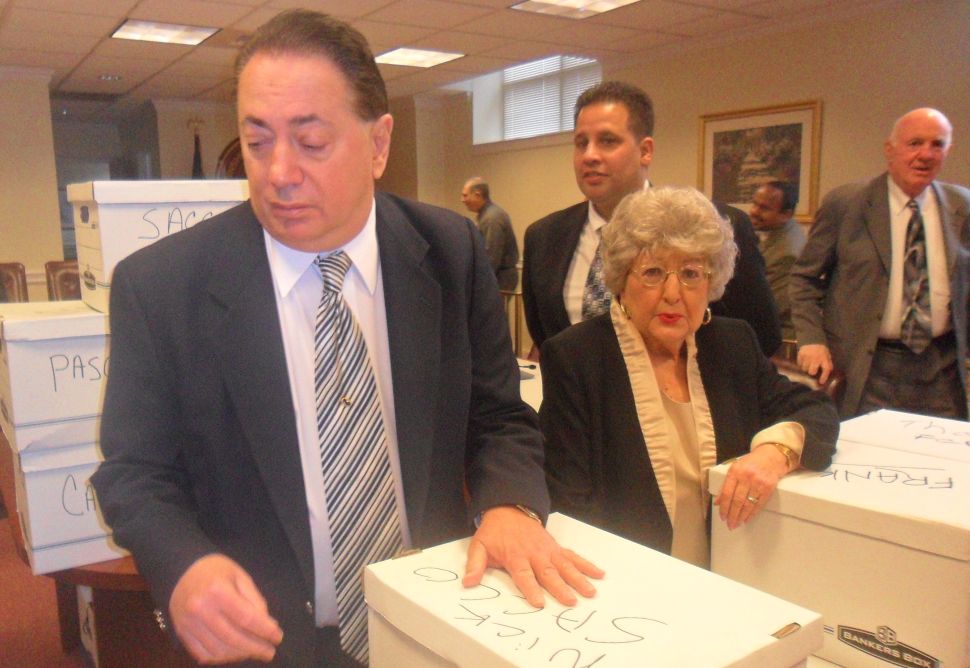