TRENTON – Can you already picture the 2013 television studio, where at one podium stands Gov. Chris Christie and at the other stands Assemblyman Lou Greenwald, (D-6), with the swamplands, dilapidated smokestacks and moderator Steve Adubato, Jr. between them and a vision of New Jersey in the balance?

Today, it was just Christie at the podium with the governor’s seal on it, but the presence of Greenwald was in the room.

For at least the second time this week, Christie singled out the Voorhees lawmaker, sending observers into giddy anticipation over a 2013 collision course between the Republican incumbent and South Jersey’s Gordon Gekko look-alike, chair of the budget committee.

Earlier this week, Greenwald bemoaned Christie’s family care freezeout, and today the governor slapped at his Democratic adversary in response, pointing out that Greenwald supported the same cuts in 2003 when Democratic Gov. Jim McGreevey was in charge.

“When he was asked about it he said, ‘Let’s not look back, let’s look forward,’ well, you bet, because hypocrisy looks really bad in the rearview mirror,” Christie said.

The governor doubled back on Greenwald later in the press conference, eliciting giggles when he referred to a basketball metaphor the budget committee chair had used in describing the governor’s performance in clutch time.

“That’s how I’ve always pictured Lou Greenwald – with the perfect hair and the perfect suit, waiting for the ball at the buzzer,” Christie said.

The governor also dinged Greenwald at a few town halls recently, including Cherry Hill this week. 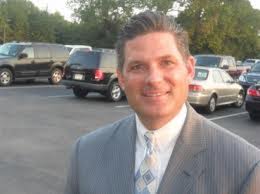