Christie has laid down the groundwork for this reform over the past year in fair detail, including new evaluation methods for teachers and principals; revision to the tenure process; establishment of teacher compensation factors; mutual consent for teacher placement; and elimination of certain seniority rights.

“We cannot, as a state, tolerate a public education system in which some children have access to good teachers while others do not,” Kyrillos said in a statement today. “We must make the system work better for kids by rewarding excellent teachers and removing those who are not effective in the classroom. In order to meet the state constitution’s requirement of a thorough and efficient system of public schools for all children, we must put their needs above all else in every facet of our educational system. That includes how tenure and compensation are earned.”

The bill, S2881, is currently being reviewed by the Office of Legislative Services and should post for introduction at the next Senate quorum. The Senate GOP release said the legislation “replaces traditional teacher tenure with protections that must be earned and maintained through annual evaluations that rely heavily on classroom observation, making it easier to identify and remove ineffective teachers from the classroom.”

Also: “The pay structure of the teaching field will be reformed as well. Student achievement will play a role in determining salary awards under the bill, a change from the current system which compensates teachers based on seniority.”

The bill is available below for reading.

Speaking at a panel discussion with the Heartland Institute last week, Kyrillos was pressing another education reform bill, S2569, the “Parent Empowerment and Choice Act,” a “parent trigger” bill that gives parents in failing school districts petition power to enact some administrative oversight. If student test scores are bad, a petition from the majority of district parents could replace administrators and staff, establish a tuition voucher system, or convert a district school into a charter school.

Kyrillos said, according to a statement on the Senate GOP website, “If enacted into law, my bill would give parents in these districts – some of the poorest and most dangerous in New Jersey – the ability to build a better tomorrow for their children by forcing immediate improvements to a school that is failing to educate its students.” 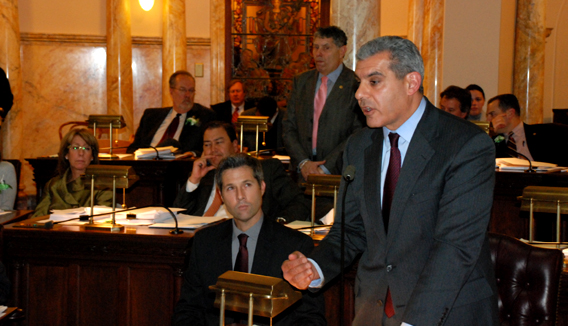