When Senate President Steve Sweeney, (D-3), West Deptford, made a 2009 power play to dethrone Dick Codey from the rostrum, he told people he could lean on GOP votes in a pinch to take down Codey, but didn’t want to do it that way. Now the threat of using those cross-the-aisle votes makes him a no-brainer player to lock up the leadership position again.

At the same time, Sweeney’s consolidated stance as a Trenton power player could finish him as2013  Democratic Party gubernatorial timber, and quicken the stride of a South Jersey prospect like Assemblyman Lou Greenwald, (D-6), Voorhees, who’s more sharply defined himself as a counterpoint to Gov. Chris Christie, sources say.

As he heads into the teeth of an election year and the dwindling months of his two-year freshman term as Senate prez, Sweeney is in the middle of hammering out public pension reform with a Republican governor dependent on Sweeney’s legislative muscle to get the job done.

Whatever his same-party obstacles, at least three sources now say that Sweeney can lock up his Senate presidency with across-the-aisle support from Republicans if he continues to “carry the ball” – in the words of one source – on pension reform and ultimately gets it done.

He may not need Republicans but key legislative elections’ outcomes aren’t yet knowable, and having the GOP in reserve doesn’t hurt. At least one power player said Sweeney won’t have to depend on Republicans.

“That doesn’t happen,” said state Sen. Ray Lesniak, (D-20), Union. “There have been attempts at that in the past but Steve Sweeney is first and foremost a Democrat.”

Persistent Christie critic Senate Majority Leader Barbara Buono, (D-18), Metuchen, provided an energized microphone presence at a police and fire rally earlier this year contrasting with Sweeney’s absence. The Senate majority leader has repeatedly clashed with Sweeney over strategy, consolidated her voice as a defender of public sector employees, and as late as last week sat with other senators in caucus as Sweeney railed against those forces in his own party who are trying to weaken him.

With one eye on a Middlesex County Democratic Committee battle that could result in depriving her of the line two years from now depending on the outcome and depending on the organizational ties to Sweeney and Sweeney’s South Jersey ally George Norcross III, Buono has two options going forward, neither of which negates the other, according to legislative sources.

She can make a play for Senate president by organizing the dispossessed progressive members of the caucus – and by corralling any of the strands of unaffiliated members – and/or make a run for governor in 2013 as the leader of the tattered fringes of the organization-minded party.

The South Jersey-based Sweeney, for his part, can get in front of at least one of those Buono maneuvers by leaning on the GOP to guarantee him another tour of duty on the Senate throne.

If the Senate prez must rely on GOP leadership for power, he could negate his chances of viably creating primary traction for a gubernatorial shot against Christie, something his critics say was already obviously in place given Sweeney’s willingness to work with the GOP governor on a number of key initiatives, including pension reform.

Sweeney might be able to get the prize again without having to reach across the aisle.

Already firmly in charge of the Senate by a 24-16 margin, the Senate president can warchest his way back into power if he helps bankroll the successful campaigns of state Sen. Jim Whelan, (D-2), Atlantic City, state Sen. Linda Greenstein, (D-14), Monroe, and state Sen. Robert Gordon, (D-38), Fair Lawn, all of whom find themselves in battlegrounds this year and might need money – in exchange for support; and secure the organizational support of Union and Middlesex counties.

State Sen. Brian P. Stack, (D-33), West New York, is a wild card and had at least one bruising backroom encounter with Sweeney last year, but probably would side with Sweeney given Sweeney’s common practice of being able to work with the governor.

Sources say state Sen. Paul Sarlo, (D-36),  Wood-Ridge, has promised to deliver the Bergen delegation to Sweeney’s corner, (Sen. Loretta Weinberg, Sarlo himself and Gordon) in exchange for helping to keep Gordon afloat financially – and in exchange for continued support among the party’s power elite for leadership viability.

The 38th District senator’s ELEC report this week shows an $8,000-plus donation from Sarlo.

“Wacky,” was how Weinberg described the scenario. “Sarlo has given him money, and so has Sweeney, and I will too. The ‘exhange’ is we hope he gets elected.”

In the event Bergen goes for Sweeney, that still leaves an additional 13 bodies, who could go either way depending on what they’re offered, and who could be coaxed into a third camp. Lesniak and Union County two years ago received – at the very least – leadership positions for State Sen. Nick Scutari, (D-22), Linden, and Assembly Majority Leader Joe Cryan, (D-20), Union – who may be in the offing for bigger chunks of power thie time.

Sweeney can negate that with the pension reform and Republican cards, but again, Lesniak said he doesn’t think he will.

In other words, he’ll negotiate.

As Sweeney shows no intention of backing away from pension reform, his lifespan as Senate president for at least two more years appears rock-solid, even if his gubernatorial ambitions, such as they are in Christie land, look DOA.

That said, at least two Democratic sources this week said Assemblyman Lou Greenwald, (D-6), Voorhees, chair of the Budget Committee, is, at this point, a much more likely South Jersey prospect for governor than Sweeney, just as Buono, coming out of Middlesex County, would be more likely – given the stymied influence of the GOP – to go straight for governor as opposed to Senate president. 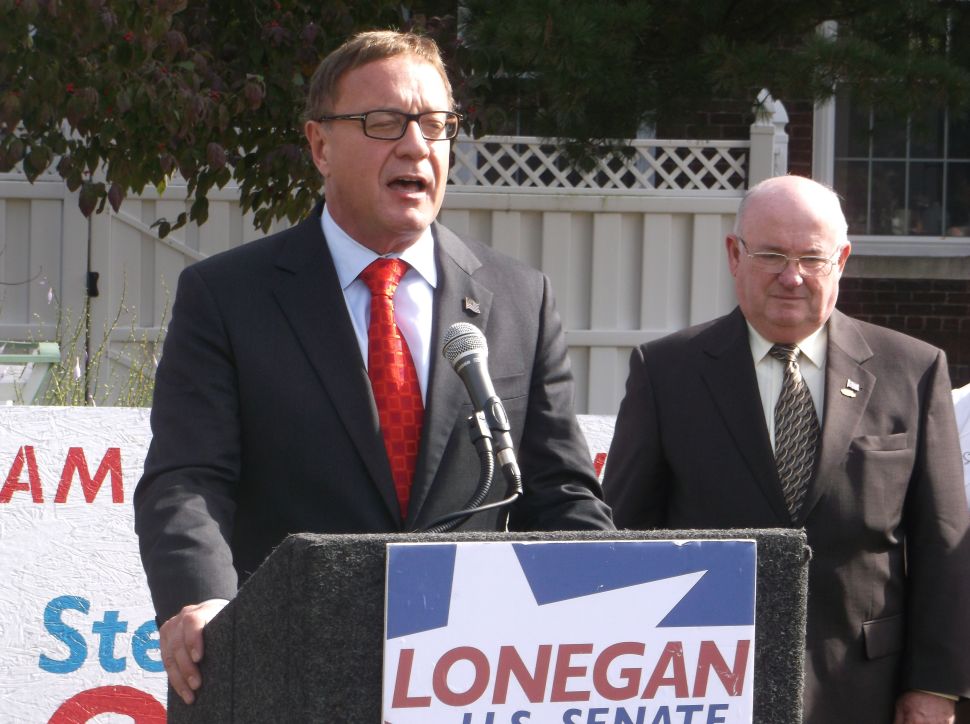