TRENTON – As the clerk closed the machines on the floor of the Assembly chamber, a barrage of releases instantly appeared proclaiming Democratic Party glee over the restoration of women’s healthcare, education and public safety funding.

“This is political showmanship,” said Dr. Brigid Harrison, professor of political science at Montclair State University. “The Democrats have spent the last year kowtowing to Gov. Christie in the wake of pension and benefits and now they are trying to re-establish themselves.”

“Gov. Christie may have callously turned his back on vital services for women and newborns in his last budget but he has the ability to correct his mistake this time around,” said Assemblywoman Valerie Vainieri Huttle (D-37) of Englewood.

“Doing so will improve public health for some of our least fortunate, while saving taxpayers money. These are ideals that everyone should be able to embrace. Unfortunately, time and again, the Governor and his Republican colleagues have relegated the needs of low-income women to the sidelines.”

The next email blast of this magnitude is expected to occur the moment Christie chops that money in a line-item assessment as soon as he mulls through the procedure.

Harrison admitted that the Democrats’ efforts occurred in “the 9th inning and that Christie will emerge from this episode as the policy winner on both pension and benefits reform and the budget.

“It’s inside baseball, but the governor can now go on the record railing against the Democrats for spending and the Democrats can rail that the governor took away school aid and make a class warfare argument,” she said. “The reality is none of their measures will be enacted.” 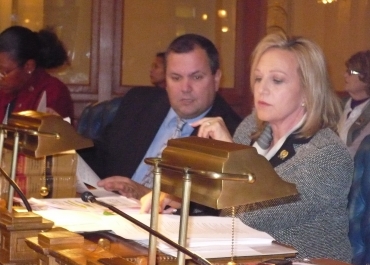