TRENTON – To memorialize what his allies say is the biggest achievement of his tenure, Gov. Chris Christie couldn’t resist the solemn, auspicious surroundings of the Trenton War Memorial today to wield his pen and sign into law pension and benefits reform.

“It is an important moment for the State of New Jersey… and New Jersey has once again become a model for America,” said the governor, who hailed the law as a projected savings of $132 billion over 30 years.

The setting reflected at once the resolution of a war and the persistent symbolism of one, but as state Senate President Steve Sweeney (D-3) of West Deptford joined the GOP as a proud across-the-aisle ally, Christie continually underscored the bipartisan nature of this conquest even as a lowgrade civil war persisted among Democrats.

With Speaker Sheila Oliver (D-34) of East Orange absent due to a “scheduling conflict,” South Jersey’s Sweeney was the only member of his party standing at the head of the high-ceilinged room prior to the arrival of numerous dignitaries, packing a stage overloaded with suburban Republicans and dotted with a few local D’s culled mostly from urban municipalities.

“When no one would stand up for this, when no one else stood out and had the politicial courage to say this needed to be done, he had the courage five years ago to come forward with ideas,” Christie said in specific recognition of Sweeney.

“I am a Johnny Come Lately in this fight, compared to the Senate President,” the governor added. “He stood his ground. He made the compromises he needed to make, but he never compromised his political principles. That is an act of political courage. When you look back, people will conclude… Senator Sweeney was able to erode just a little bit the cynicism people have about people in public life.”

A third of Sweeney’s caucus supported the reform measure.

“We believe in supporting the taxpayers of the state,” said Sweeney, standing at the lectern following the governor’s address. “Too often politics gets in the way.”

Today it merely broiled at the edges of ceremony as Sweeney’s presence here in a roomful of clapping Christie allies merely heightened a sense of the divide in Sweeney’s own party.

From beyond the massive doors, the governor’s opponents bristled, citing what they see as a crushing defeat for public sector labor and collective bargaining rights and a governor in the throes of heady political designs.

“Governor Christie’s union busting bill signing today represents a dark day for New Jersey,” said Assemblyman Joe Cryan (D-20) of Union Twp. “Today, the majority of Democrats in the General Assembly are forced to sit idly by, again, while the Governor reaps the benefits of his divide and conquer strategy to achieve national prominence at the expense of New Jersey’s residents.”

Cryan’s remarks came a day after reports leaked out of Sweeney’s caucus of D’s fighting D’s as state Sen. Richard Codey (D-27) of Roseland and state Sen. Ronald L. Rice (D-28) of Newark challenged their colleagues to act like Democrats and resist the ramrod triumvirate of South Jersey/Essex County/Christie control.

“You’re damn right,” the governor told reporters when asked if he had spoken to powerful South Jersey Democratic leader George Norcross III about pension and benefits reform, adding that he talked to “everyone,” including people in the street about the plan.

“With his signature today, Gov. Christie proved once again that his promises cannot be trusted,” said Keshishian, whose union attacked Norcross and Christie together in an ad buy during the days the legislature considered pension reform on its way to passage.

“As a gubernatorial candidate, he wrote an open letter to teachers stating that ‘nothing about your pension is going to change when I am governor.’ Today, he signed legislation that strips away already-earned benefits from both current and future retirees. Under this law, many current and future retirees will see the value of their pensions drop by 40% or more over the course of their lives. Yet we are more than 17 months into his term and he has yet to contribute a single dollar to the pension systems. The only thing about pensions that has not changed under Gov. Christie is the state’s abject failure to make its contributions, even as the contributions required of public employees have increased.”

“I got sent here to do a job,” the governor told reporters when asked if the public sector protesting bothered him. “I wasn’t sent here to be prom king. …When I got here I found circumstances to be different than what (Gov. Jon Corzine) told us. There are lots of things that changed from what Gov. Corzine told us during the campaign.”

As for the protests of Cryan and other Democrats who fought the reforms Christie signed today, Christie stayed focused on building blocks like Sweeney and South Jersey legislators and Essex allies who worked with him.

“We did it in a bipartisan way,” the governor said. “That’s a model for America.” 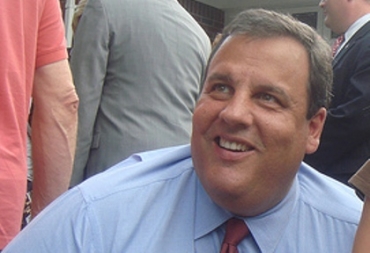