“I’m overwhelmed,” Barnes told the crowd when he stood at the microphone. “When you think that this many people showed up – 900 and some odd people – it shows grassroots Americana. The committee people are the ones who make this organization work.”

The final tally was 517 voes for Barnes and 412 for McCabe. The shoulders of McCabe’s troops slumped when they saw the numbers climbing over 900. They had targeted 400 votes and calculated a win around a lower turnout.

“Peter,” said Assemblyman John Wisniewski, (D-Sayreville), grabbing Barnes’s shoulders on the new chair’s march to the podium, “whatever I can do to help.”

McCabe was gracious in defeat.

“It was an honor to run against you,” he told Barnes, “because we both come from the same mindset. (Over 900) people came out tonight. That’s a credit. To my supporters from Woodbridge, my base, you were wonderful.”

The younger Barnes, an Assemblyman from Edison who took his father’s seat when the elder Barnes retired from the Legislature, told PolitickerNJ.com, “We have to come together, and I am confident we will.” 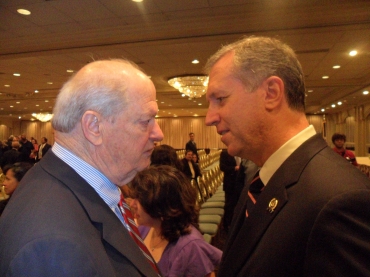