Rancher Tom Brokaw and his wife Miss South Dakota Meredith Auld Brokaw recently downsized their New York spread, buying a two-bedroom co-op at 33 East 79th Street. Their 10-room duplex at 941 Park Avenue went into contract back in April, but this being a New York City co-op, these things take time. The purchase just closed for $10 million, according to city records.

The buyers are David Shapiro, a founder of private equity firm KPS Capital Partners, and Abigail Pogrebin. No trophy wife she, Ms. Pogrebin is the daughter of Ms. magazine founder Letty Cottin Pogrebin and her twin sister, Times scribe (and Observer alum) Robin Pogrebin. In addition to publishing a book two years ago about being an identical twin, One in the Same, Ms. Pogrebin worked for Charlie Rose, as one of his eponymous show’s original producers, and later Bill Moyers and 60 Minutes. Her first book, published in 2005, is Stars of David: Prominent Jews Talk About Being Jewish, and she also regularly corresponds for the nation’s top magazines.

Keeping the journalist quotient going, the building is also home to Kathy Black, as well as TKTK. The home came on the market a little over 11 months before it closed on May 25, asking 12 million. That price was reduced to $10.75 million at the end of September.

“Located in one of Park Avenue’s premier white glove co-operatives, this high floor palatial and sun-drenched prewar twelve into ten room duplex apartment features some of the most spectacular formal entertainment space in New York with fabulous sweeping city views,” write Cathy Franklin and Alexis Bodenheimer in their Brown Harris Stevens listing. Because we all know Mr. Brokaw is the consumate entertainer.

The three-bedroom spread is an off-set duplex, with a large living room, library and dining room on the first floor connected by a grand 28-foot gallery. The maid’s quarters have been converted into a office with built in, perfect for writing about the greatest generation or the greatest Jews. Upstairs, the master suite features a walk-in closet for him and a dressing room for her with six closets. That is unless Mr. Brokaw was the clothes horse–you’ve got to look good under those klieg lights. 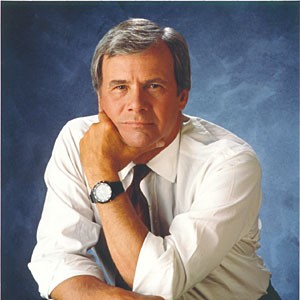