The Observer can’t help but wonder if Ashwini Gupta has a $12 million credit line with his company, American Express. That is how much he would need to put his new roost at the Park Millenium on the old gold card.

Mr. Gupta, the chief risk officer at AMEX, and his wife Anita Gupta just purchased a three-unit, 4,846-square-foot spread from Eugene Melnyk, owner of the NHL’s Ottawa Senators, according to city records. The four-bedroom condo first came on the market in September for $16.9 million before being cut to $14.995 million, according to StreetEasy. The site shows it went into contract at the end of April.

Mr. Melnyk, who made his fortune in medical publishing and later pharmaceuticals, bought two units on the 44th floor in 1995, a year after the building was completed, for just over $3 million, city records show. In 2002, he purchased a neighboring condo for $625,000, putting him in possession of more than half of the floor in the 57-story tower built by Millenium Partners. Until the Time Warner Center opened last decade, it was the tallest building on the Upper West Side.

Mr. Melnyk’s purchases and this sale were made on behalf of a holding company in the Cayman Islands, but Department of Buildings records from when he combined his units, as well as The Times, reveal him to be the seller.

A massive 600-square-foot bedroom is located on the northeast corner of the home, which connects, via sculptural crystal panels, to the den, office, and master bedroom beyond, all facing the park. The river-side features the three other bedrooms and the library. The spread is larger, even, than the Guptas’ Scarsdale home, a four-bedroom Spanish Colonial that Zillow pegs at 3,791 square feet.

Clearly, Mr. Melnyk has the taste of the Roman Senators his team is fashioned on, as indicated by Dorothy Somekh and Patrycia Harbison‘s Halstead listing: “The grand, ultra luxurious master bedroom suite with hand molded, hand plastered columns and hand stenciled ceiling has an adjacent office overlooking the Park; his and hers mahogany dressing rooms with built-in leather valet accessory drawers by Louis Vuitton and mahogany master bathroom with double sinks with waterfall faucets, a soaking tub and separate shower stall.”

How many AMEX points does it take to buy custom Louis Vuitton drawers? 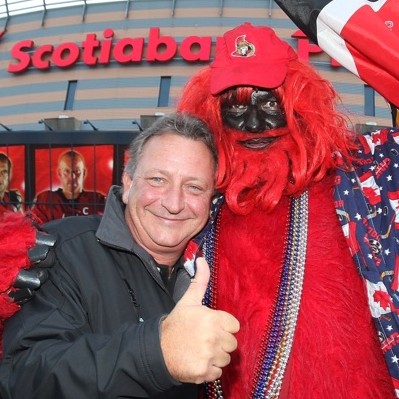