Ending more than a month of speculation, Democrats in the legislature announced Thursday they have prepared their own budget which they plan to vote on late next week.

Senate President Steve Sweeney said the $30.5 billion budget will differ greatly from the spending plan introduced by the governor earlier this year.

The party also plans to introduce a separate bill instituting a tax on incomes over $1 million.  The tax would raise the effective rate on income over $1 million from 8.97 percent to 10.75 percent.  Sweeney said the new tax would add an average of $40,000 in taxes to about 16,000 taxpayers.

The school funding restoration would include money for all districts as well as the $500 million in additional money for the Abbott Districts ordered by the Supreme Court last month.  The plan also would restore full funding to another 200 or so schools considered below funding adequacy.  A portion of the millionaire’s tax would be used to restore the remaining school districts to full funding as well as toward tax relief for seniors.

Gov. Chris Christie has already promised to veto a millionaire’s tax, but according to Sweeney, the party remains undaunted.

“This is not theater, it’s principle,” he said.  “This is about what we believe in and what we stand for.”

Sweeney said the budget restores funding for continued short-term operation of New Jersey Network.  A veto of the proposed transfer of NJN operations  to WNET is set to be voted on by the assembly tonight.  Sweeney said he doesn’t yet know if the senate also will veto the deal, but said a budget committee hearing earlier today on the transfer shed light on some “disturbing” things.

Sources have told PolitickerNJ that the senate plans to approve the resolution vetoing the deal next week.

The senate president said the Democrats’ plan will fund $50 million for police in cities and towns where the crime rate is rising.  Another $47 million is earmarked to restore funding for Urban Enterprise Zones.  The Democrats plan to make the statutorily required $506 million pension payment. The budget will leave about $400 million in surplus.

As part of the budget, the senate plans to introduce a resolution laying out parameters for the governor’s proposed Medicaid waiver.  Sweeney called the governor’s plan to drop the income threshold for the NJ FamilyCare program “inhuman” and said the $9 million savings from the drop will be restored.  Currently a family of three earning under $24,600 would be eligible.  Christie’s proposal would drop the threshold to a family earning under $5,000 per year.

In March, Christie introduced a $29.6 billion spending plan that increased aid to schools over the previous year and added nealry $200 million to the Homestead rebate program.  That money was tied to passage of Christie’s initial proposal for pension and benefit reform, which the governor estimated would save more than $320 million in the coming year.  Actual savings from the plan up for vote tonight is just $10 million in the coming year.

Christie’s proposal called also for $200 million in business tax reforms as well as increases in tuition aid grants and hospital aid.  The governor’s budget nixed all funding for NJN after Christie said repeatedly the state should not be in the TV business.

The deadline to pass the budget is June 30. Sweeney said the senate budget committee will meet Monday to discuss the plan with an eye toward a full vote as early as Wednesday. 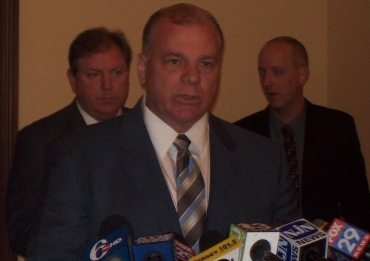