The failed resolution would have disapproved a contract that will allow WNET to  take over the longtime New Jersey public television network’s operations.

“It hasn’t really sunk in yet,” Aron said. “There’s been so much intrigue around this that I haven’t had time to process our demise. In a perverse way, it’s kind of exciting to cover. It’s about us.”

About keeping focus on the job:

“We were at the center of New Jersey’s political drama. It’s been a challenge. But in the end, I decided to cover it like a big story.”

About his future plans:

“I really don’t know. I’ve been a journalist for 41 years. It’s all I know. But I’m looking forward to the time off. Quite frankly, if we did get a reprieve, I don’t know how we would have kept on going. We’re all exhausted, drained, demoralized, and angry.” 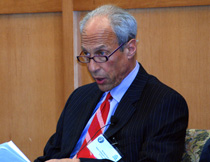