“I feel very comfortable running for re-election in support of that budget,” said Gordon, who must get past Bergen County Freeholder Director John Driscoll in the general election.

The budget would not restore a substantial amount of police and fire aid to Bergen county relative to other counties with urban municipalities. Fairview would get $145,268, Hackensack $451,605 and Carlstadt $64,334.

But Gordon celebrated the restoration of school aid stripped from schools last year.

“This budget would return $86.4 million to non-Abbott District schools,” he said. “It puts money back into schools that have been disproportionately hit.”

Hawthorne, the one Passaic County town in the senator’s newly configured 38th District and confronted with 46 professional school district lawyoffs, would get $2.2 million. Lodi in the Democrats’ budget would receive $7.9 million.

“This is a solid budget based on conservative assumptions,” said Gordon, who noted $300 million in cuts to Gov Chris Christie’s proposed budget. 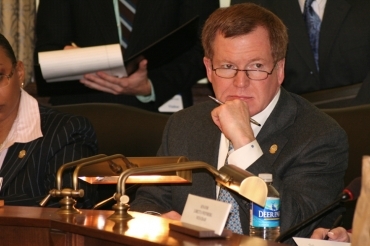