TRENTON – Union protesters revved up their chants late today as the Assembly voting session scheduled to begin at 1 p.m. showed no signs of starting as clocks ticked past 4 p.m.

For the third time in seven days, union supporters gathered by the thousands outside the Statehouse to protest the massive overhaul of pension and health benefits for public workers.

The Senate passed the bill earlier this week, and the Assembly is scheduled to vote on it today.

Some participants said they hope that the passage of the controversial pensions and health benefits reform legislation is not a done deal. The protest outside the Statehouse reached a fever pitch and members started their “funeral march” to the Statehouse Annex.

The protesters, including teachers, firefighters, and other public employees, started chanting their common refrain, “Kill the bill,” accentuated by a tuba and other horns.

Jeff Tittel, director of New Jersey Sierra Club, stirred up the crowd, saying the only thing green about the Christie Administration “is the money he receives from corporate polluters.”

Another individual among the protesters asked why Senate President Steve Sweeney, (D-3), of West Deptford, author of S2937, the Senate’s version of the benefit reform bill, couldn’t draft legislation against insurance brokers.

“I can answer that: George Norcross,” he said, referring to the powerful South Jersey powerbroker whose insurance business some protesters say will benefit from this legislation.

Among the myriad signs held up by the pickets were “No taxation without negotiation,” “Stop Christie’s Race to the Bottom” and “Stop the Republicrat-Con$.”

The demonstrators used their large video screen to single out Assembly Democrats for protestors to call: 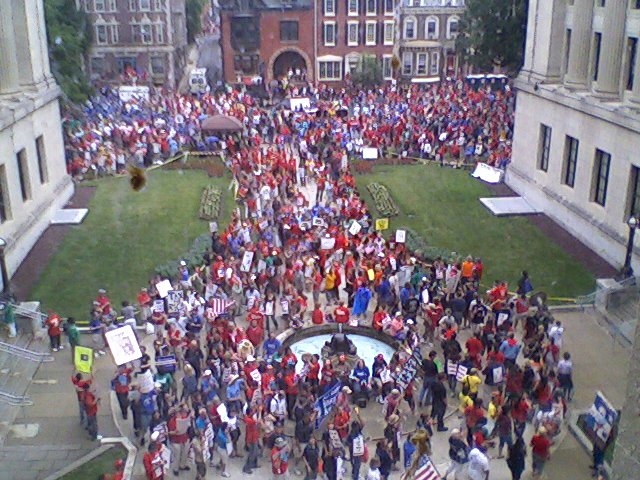