In a dogfight for re-election by the reckoning of political insiders, state Sen. Bob Gordon (D-38) appeared in support of public workers today outside the Statehouse Annex.

“I am here standing in solidarity with you because I believe collective bargaining is a basic civil right,” said Gordon, who’s running against Bergen County Freeholder Director John Driscoll.

“We remember Dr. King’s last trip to Memphis, he was there to defend the labor rights of public employees who were trying to improve their lives,” said the senator. “Dr. King knew labor rights and civil rights are simply two sides of the same coin. This legislator is not going to vote for any bill that strips the civil rights of fellow Americans.”

From afar, his Republican opponent objected to Gordon’s stance.

“I’m kind of saddened by this,” Driscoll said. “Mr. Gordon came to a middle school in Paramus and he said bipartisanship is how it should be done. The problem I have is you have the governor, senate president and speaker getting on the same page and Senator Gordon is trying to throw a roadblock in. Invoking Dr. King? I think we’re invoking a little dramatic theater. If he wanted to mention Dr. King, Dr. King was all about working together. Mr. Gordon is standing in the way of that.” 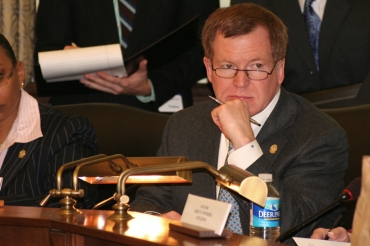