Rannells and Gad in The Book of Mormon. Photo via Joan Marcus.

There are several reasons for this: First, there is one widely admired musical that will not only win many of the big awards but actually deserves to do so. (Ahem, Memphis, last season’s so-called Best Musical.) Second, it’s been a fantastic year for plays, with four nominees—and another one or two that went unnominated—that could fairly be named the winner. And third, because this season the press, dropped as Tony voters two years ago, has been readmitted—at least, members of the New York Drama Critics Circle have—giving the professional complainers one less thing to complain about.

So what are all these people saying? Let’s look at the major award categories and detail the kibitzers’ consenses. (This effort has been helped immeasurably by the good people at StageGrade.com, who annually canvass a range of critics and tally their predictions.)

Best Play
This is the night’s big question mark. Both New York Times critics, plus those polled by StageGrade, agree that Nick Stafford’s War Horse is the favorite. That makes sense: this story of a boy and his beloved horse making their ways through World War I is a big, sweeping, gorgeous production that’s been impressing critics and wowing audiences. But there’s also a problem: pretty and puppetted though it is, it’s also a lousy play, a simplistic and cloying children’s story with frequently terrible dialogue. (Most expect its directors, Marianne Elliott and Tom Morris, to win Best Direction of a Play, which is far more justified.) There are predictive undercurrents for David Lindsay-Abaire’s Good People, which won the Drama Critics Circle prize, and Jez Butterworth’s Jerusalem, which the Drama Critics named best foreign play; I’d prefer to see either of those plays win.

Best Musical
And this is the night’s most predictable moment. The Book of Mormon will win—and should win, as everyone agrees. The only thing to wonder about: Will other shows have a shot at any of the other awards for musicals? Likely not. The Broadway soothsayers predict Mormon to be a lock for Best Direction of a Musical, Best Book of a Musical and, probably, Best Original Score (though that last one could, just possibly, go to The Scottsboro Boys, the final Kander and Ebb collaboration).

Best Revival of a Play
In another pleasantly packed category, with three productions that could plausibly be winners—the lovely and moving Al Pacino Merchant of Venice, the winkingly elegant Brian Bedford Importance of Being Earnest, and the stark, stunning Joel Grey-George C. Wolfe staging of Larry Kramer’s The Normal Heart—all the predictors agree that the latter will take the prize, and deserves to.

Best Revival of a Musical
Here’s another easy one. There were only two musical revivals on Broadway this season, and therefore only two nominees. One of them—How to Succeed in Business Without Really Trying, starring Daniel Radcliffe—wasn’t very good. That leaves Kathleen Marshall’s staging of Anything Goes, which is fun and energetic and offers the twin pleasures of Cole Porter and Sutton Foster. It’s not revelatory, but it’s enough. It should and will win.

Best Actor in a Play
Nearly everyone agrees, tepidly, that this will go to Mark Rylance for his remarkable performance as Rooster Byron, the feral Pied Piper in Jerusalem. (His cause is helped by his equally impressive turn in the less-lauded La Bête earlier this season.) But lead Times critic Ben Brantley is a prominent dissenter, predicting Al Pacino will win for his Shylock. Others note that they wouldn’t be surprised for this to go to Mr. Pacino or to Joe Mantello, for his surprisingly endearing Ned Weeks in The Normal Heart. I thought Bobby Cannavale, another nominee, was revelatory in The Motherf**ker With the Hat. But I’d put my money on Mr. Rylance.

Best Actress in a Play
Further unanimity here: This award will go to Frances McDormand for her subtly shaded performance as a tough, embittered working-class woman in Mr. Lindsay-Abaire’s Good People. This will mean overlooking Lily Rabe’s strong performance in Merchant and Nina Arianda’s eye-popping Broadway debut in Born Yesterday—“We have a new Lucille Ball here, and attention should be paid,” New York’s Scott Brown told StageGrade—but such are the tough realities of awards shows.

Best Actor in a Musical
This is a tough one to call. Many of the critics are predicting a win for Josh Gad, as the slow, sloppy, accidentally successful missionary in The Book of Mormon. (I checked his name on my Tony Awards ballot.) But it’s also possible that he and his castmate Andrew Rannells, another nominee, could split the Mormon vote. The Timesmen still give it to Gad; the StageGrade predictors see it going to the beloved Norbert Leo Butz for his role in the unloved Catch Me If You Can. I’m rooting for Mr. Gad, but I predict Mr. Butz.

Best Actress in a Musical
Easy: Sutton Foster, for her bravura turn as Reno Sweeney in Anything Goes. No one else comes close. 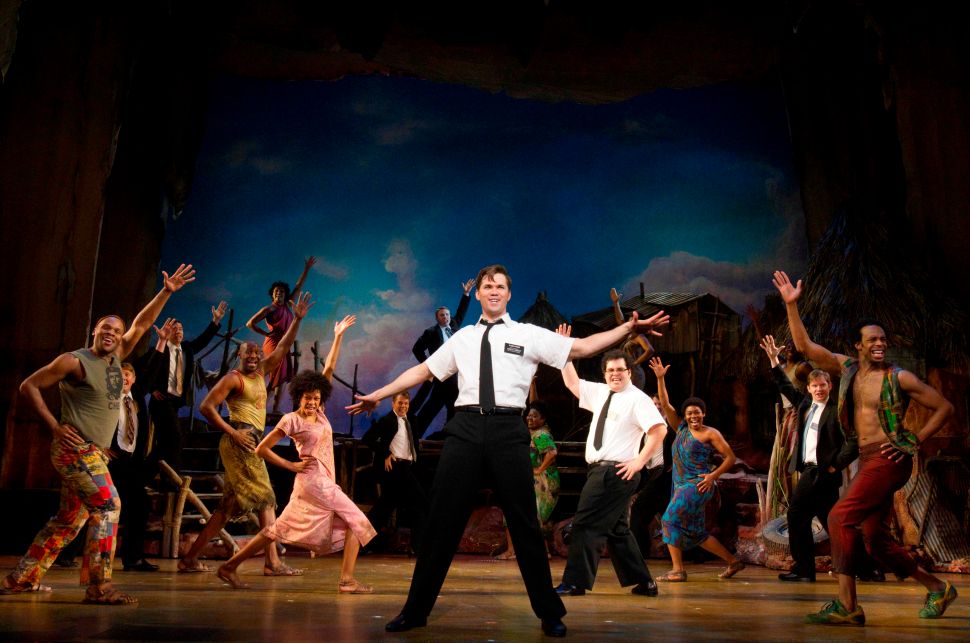