The New Jersey Education Association has found a new target in its war against public officials who don’t cotton to its pro-teacher agenda.

The state’s largest teachers’ union has now set its sights on Senate President Steve Sweeney for his support of legislation that would reform public employee health and pension benefits.

In a television spot running in both the New York and Philadelphia media markets, the NJEA accuses Sweeney of using the benefit reform legislation to do the bidding of South Jersey political boss George Norcross.

The ad cites a provision in Sweeney’s original proposal that would have closed the state’s health insurance plan to new entrants, instead steering them to private insurers.  Sweeney was accused of trying to push business to Norcross, a childhood friend and president of an insurance firm that does business with public entities.

Sweeney eventually dropped that portion of his proposal, but this week Republicans took issue with another portion of the bill that would make it more expensive for employees to visit an out-of-state hospital.

That provision, Republicans contend, was also designed to help Norcross, who is the chairman of Cooper University Hospital in Camden.

NJE A president Barbara Keshishian also took aim at Sweeney in an Op-Ed published Wednesday in the Star Ledger.  In the piece, entitled “Where’s the transparency in New Jersey’s benefit reforms?” Keshishian accuses Sweeney and Christie of taking ” thousands of dollars a year out of the pockets of hundreds of thousands of New Jersey’s working families.”

The piece also mentioned the proposed moratorium on the state plan and accused Sweeney of trying to “protect his patron.”

“The NJEA is fiddling with our teachers’ money while Rome burns. This $1 million attack ad won’t do a thing to save the pensions of hundreds of thousands of teachers and retirees from collapse, or give property taxpayers any relief from the ever-increasing weight of health benefits that hangs around their necks,” Sweeney said in the statement. “I asked for input from the NJEA, knowing the status quo was unsustainable for both their members and taxpayers. Our teachers deserve leadership that seeks solutions, not disingenuous ways to waste members’ money fighting them.”

But while Sweeney implies the NJEA never responded to his request, union officials say they sent him a proposal more than a month ago, but heard only silence from the senate president.

“More than a month ago, we submitted a thoughtful proposal on health care reform to Senator Sweeney,” Keshishian said at a news conference Wednesday. “It called for the kind of transparency we’re calling for today, and it called for collective bargaining to determine health care benefits. We never even had the courtesy of a response from Senator Sweeney.”

Some Trenton politicos, including some Republicans, were stunned at the attack on Sweeney, saying the NJEA has lost its moorings.

“They are now at war with the two most powerful officials in the state.  Three if you count Norcross,” said one Republican.  “It’s fun to watch, but I don’t get it.”

Sweeney’s bill is not overly popular with members of his own caucus and several Trenton Democrats said Wednesday there is all-out war in both houses over the bill. 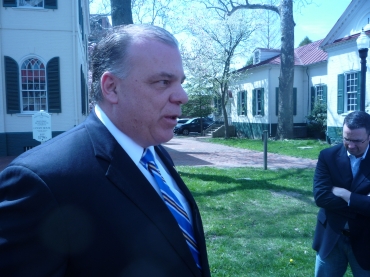