TRENTON – As expected, a resolution authored by state Sen. Loretta Weinberg (D-37) of Teaneck to put an ax in a contract dissolving NJN won’t have sufficient votes to move this evening.

“We’ll just see what happens when the vote occurs,” said Weinberg, who told PolitickerNJ.com on her way into the senate chamber following a tense cauus meeting that she was unable to change anyone’s mind to make a majority.

PolitickerNJ.com/State Street Wire reported earlier today that Weinberg only had 20 votes in favor of the resolution.

Sources said Democrats argued in caucus, with some lawmakers calling out their colleagues for handing Gov. Chris Christie the votes he needs at every turn to execute his conservative agenda. The blow-out arose from discussions of the NJN veto vote and staff was asked to leave the caucus. Sources said state Sen. Ron L. Rice (D-28), of Newark, was so upset that he called out Essex County lawmakers, two of whom are voting with Christie’s Republicans to block the NJN veto this evening. 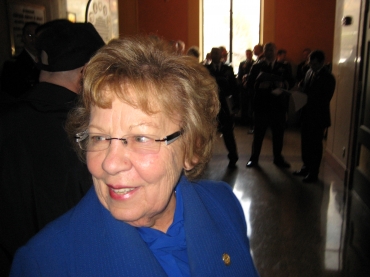