As his party engages the GOP in a standoff over the national debt, U.S. Rep. Rob Andrew’s (D-1) signature on an anti-tax pledge crafted by Americans for Tax Reform President Grover Norquist has fellow New Jersey Democrats grinding their teeth.

Observers credit Norquist as a key leader in helping to drive the debate in favor of the more rightward reaches of the GOP seeking no new taxes regardless of the consequences, and his pledge as a rallying point against President Barack Obama pushback.

Andrews’s spokesman Fran Tagmire insists the Democratic congressman’s name on the pledge is a leftover from nearly 20 years ago when he signed the Norquist pact amid the tax turmoil unleashed by anti-Florio floodgates:

“Taxpayer Protection Pledge I, _____, pledge to the taxpayers of the (____ district of the) state of ______ and to the American people that I will: ONE, oppose any and all efforts to increase the marginal income tax rate for individuals and business; and TWO, oppose any net reduction or elimination of deductions and credits, unless matched dollar for dollar by further reducing tax rates.”

Andrews’s quill pen then shouldn’t be interpreted as death do us part now, according to Tagmire.

“Congressman Andrews signed a pledge not to raise taxes in the new term he was running for in 1992,” he said. “He has honored that pledge. The Congressman has not signed the pledge in subsequent terms and believes in the present context a no tax pledge is the wrong policy.”

Norquist’s website depicts Andrews among other members of the 112th Congress, and the South Jersey Democrat stands out by virtue of being the only member of the Garden State delegation not wearing a GOP insignia who signed the pledge, and among only a handful of Democrats anywhere.

“It conveniently doesn’t state whether it was ‘signed’ during this congress,” Tagmire said. “It’s just labeled as the 112th Congress List.” 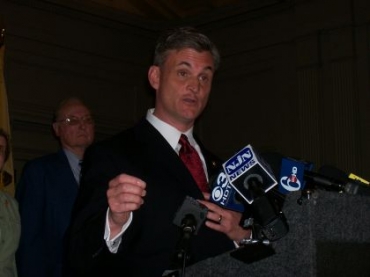