The “Dean of the Statehouse Press Corp,” Michael Aron has joined the Foundation for New Jersey Public Broadcasting (FNJBP) as vice president of News and Public Affairs.

NJTV also named Aron as its Chief Political Correspondent and announced that Aron will return as host and executive producer of his two public affairs television series, On The Record and Reporters Roundtable with Michael Aron. (Premiere dates and
broadcast schedule will be announced soon).

Aron will also contribute statehouse coverage to the NJTV-produced nightly broadcast “NJ Today” when it premieres in the fall.

“Having the chance to continue being a journalist in this state and contributing substantive content that allows me to cover the people I so
enjoy reporting on and about is a welcomed opportunity, ” said Aron, a 29-year veteran of NJN before the public television network’s demise last month.

According to a release, Aron’s role as vice president of the FNJPB will be to provide “strategic planning for the production of substantive public affairs and news oriented programming which fit the needs and requirements of NJTV.”

FNJPB recently entered into an agreement with NJTV to raise funds and to work together  on New Jersey-centric programming. 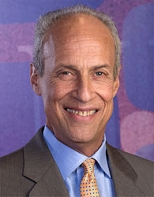