Artistes Inka Essenhigh and Stephen Mumford have settled into a new townhouse that will surely suit their creative sensibilities.

The couple bought a wacky, historic fixer-upper on the Lower East Side. Ms. Essenhigh is known for her Dali-esque surrealism and Mr. Mumford for his pieces depicting the wars in Afghanistan and Iraq.

The quirky home at 511 Grand Street is perfect for a pair of artists, built as it is on a triangular lot that gives it an unusual layout perfect for a Buñuel picture. Yet there may have been additional appeal for Mr. Mumford—he is the son of famed mathematician David Mumford, who has pioneered work in algebraic geometry.

The Federal-style townhouse was built in 1827, and was given landmark status in 2007. When Ms. Essenhigh or Mr. Mumford are looking for a meal they needn’t travel far. The first floor of the three-story building is occupied by Wing Hing Restaurant, a Chinese take-out joint that advertises “Food” on the side of the hallowed, historic façade.

Although the duo may be creative types, they showed their financial know-how in the deal. The property came on the market at $1.75 million in January of last year, but city records show that the couple paid just $1.36 million for the home. It was purchased in 2007 for $1.23 million, shortly before it fell under the spell of Landmarks, which may explain the lengthy sale.

The 1,836-square-foot duplex is split into two floors configured into right-triangle lofts. The entire building is 29.5 feet wide, stupendously big by New York townhouse standards, but it tapers down to a mere 12 feet at the back. “Original Federal style details such as its 2 ½ story height, peaked roof, pediment dormers and brick chimney,” write Avi Voda and Faina Kouperman in their Douglas Elliman listing.

It all harkens back to that age when Amsterdam Vallon was wandering these very streets. 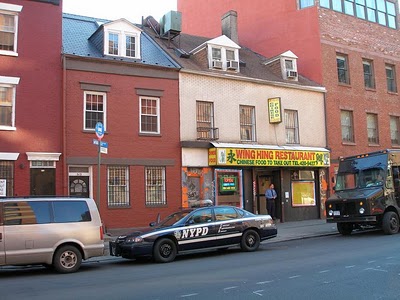