Members of Baby It's You cast

Bryant Park is not unaccustomed to crowds of families with lunch coolers in tow, corporate types wolfing down sandwiches on their lunch breaks, and high schoolers with skateboards and a curb to grind. But each Thursday  at noon until August 11, some of Broadway’s most widely celebrated (and Tony nominated) productions will call the park home, as part of Broadway in Bryant Park, a New York City summer tradition since 2006. This all comes on behalf of 106.7 Lite FM (the show’s presenter), and is sponsored by Bank of America.

As The Observer fawned over the Cirque du Soleil’s ingenious and intricate Zarkana routine, event staffers hurried around in the press tents, feverously dialing and texting Sister Act cast members, three of whom were late for their call time. “Why don’t they just fly in on their umbrellas?”, commented an event photographer. “That’s Mary Poppins,” corrected a PR rep. “Damn nuns!” the photographer finished.

As Sister Act cast members began to trickle into the park and geared up for their performance (sans flying umbrellas), Rashidra Scott, who sang as Delores, regaled The Observer with tales of Whoopi Goldberg coming backstage to the show, bearing cookies and sage advice on how to be a nun. “She says to tell the truth, and don’t hold back,” commented Scott.

Stomp seized the stage next, manipulating push brooms and makeshift drums, reminding the audience why they are still a Broadway force after seventeen years on the stage. Fritzlyn “Fritz” Hector of Stomp descended from the stage and spoke with The Observer, still riding her ‘performance high’. She insisted the performance on stage was heavily improvised, such being the nature of the 8-person show. “The show is 75% written, and the other 25% is spontaneity,” said Hector.

For Erica Ash, Baby It’s You marks her Broadway debut as the originator of the roles of Micki and Dionne Warwick, and her third offer to grace the stages of the Great White Way. “I was offered roles in The Lion King and in The Color Purple,” assures Ash, “but I didn’t want to come to Broadway unless I could originate a role.”  Broadway in Bryant Park will continue each Thursday at noon until August 11. Check www.bryantpark.org for full event listings. 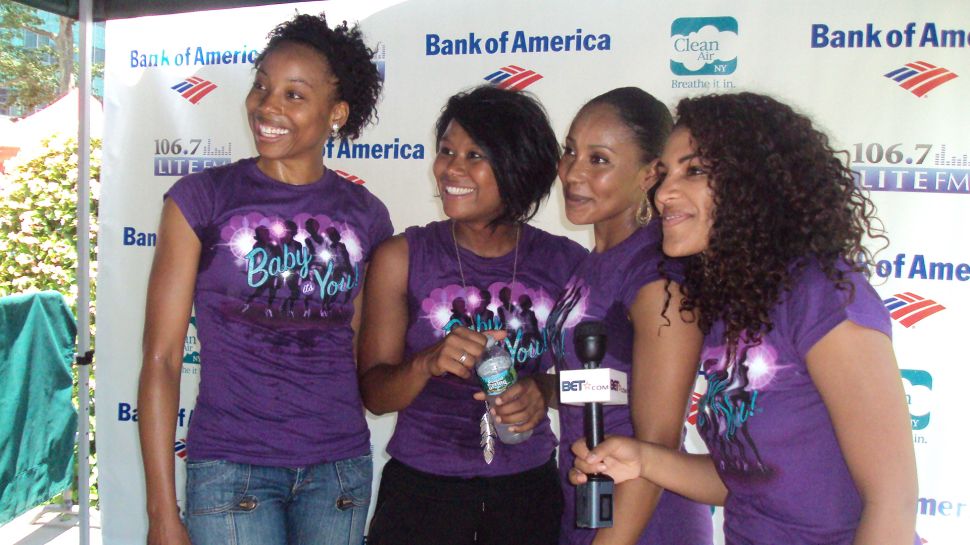