Under his plea agreement, the state will recommend that Colon be sentenced to three years in state prison.  Judge Jimenez scheduled Colon to be sentenced on Jan. 11 of next year.

“We will not tolerate conduct that deprives citizens of the right to vote or corrupts the free and fair election process that is the foundation of our democracy,” said Dow.  “This prosecution should serve as a deterrent to those who would attempt to illegally manipulate the election process in New Jersey.”

“We will thoroughly investigate any allegations of voter fraud and aggressively prosecute individuals who are found to have disenfranchised voters,” said Taylor. “Colon admitted that he fraudulently submitted messenger ballots on behalf of voters without their knowledge, and we know that, in at least once instance, it resulted in a voter being turned away at a polling place.”

The charge stems from an investigation by the Division of Criminal Justice Corruption Bureau and the Essex County Prosecutor’s Office Corruption Unit.

Authorities charged Colon; Ruiz’s husband, former Essex County Freeholder Samuel Gonzalez; and Gianine Narvaez in multiple indictments in connection with absentee ballots they collected and submitted as workers for Ruiz’s 2007 campaign. The charges included tampering with documentation for messenger ballots and fraudulently submitting such ballots as votes in the Nov. 6, 2007 general election. The workers fraudulently submitted absentee ballots on behalf of residents who never received the ballots or had an opportunity to cast their votes.

Narvaez pleaded guilty to absentee ballot fraud and tampering with public records or information, both third-degree offenses, and is awaiting sentencing. Gonzalez agreed to forfeit his seat on the freeholder board and his position as an aide to Newark City Councilman Anibal Ramos and was admitted into the Pre-Trial Intervention Program by Judge Jimenez.

Dow and Taylor said if he successfully completes the program, charges filed against him in the case will be dismissed. 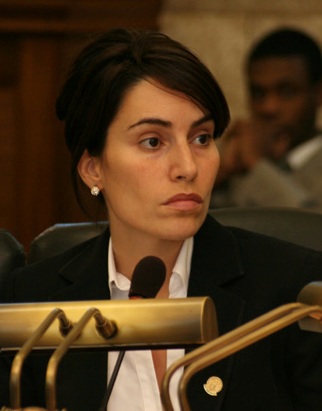