Blame it on the beard. (Getty Images)

Kelsey Grammer has a thing for starchitecture, having recently traded a rental at Robert A.M. Stern’s 15 Central Park West for his own condo at Jean Nouvel’s “Vision Machine,” 100 11th. His star power, however, has not helped him find a replacement for his rental.

According to Gatecrasher, it took eight months to let the $30,000-a-month rental:

According to the source, the 2,500-plus-square-foot apartment at the Robert A.M. Stern-designed condo has been vacant since late December and was still available as of the beginning of this month. (Another insider said Grammer didn’t actually move out until March.) Brown Harris Stevens broker Rachel Glazer, who had the exclusive listing, referred us to BHS spokeswoman Amy Glotzer who declined to comment. Shortly after we called Glazer, BHS added a “Contract Signed” notice to its online listing, which suggests a tenant has been found.

He would not be the first red carpet rogue who failed to put a shine on his old digs. Fellow 15 CPW rooster Alex Rodriguez moved out of the building because his rental was being shown too much, and even after he decamped to the Rushmore (well, maybe he did), his spread failed to sell. This might have more to do with the exorbitant asking prices, $55 million in this case, than the star tenants. After all, Jennifer Aniston has no problem moving product. 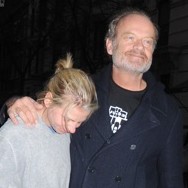