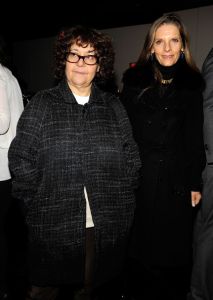 In 2008, Ms. Sischy was editor-in-chief and an 18 year-veteran of Interview when she left the magazine; having been a contributing editor at Vanity Fair since 1997, becoming the international editor of Italian Vanity Fair seemed a natural fit. Very interestingly (and at the same time), Ms. Brant—Interview’s chief executive officer, president, and the publisher of Brant Publications—sold her 50 percent interest in the company, and also exited. She became the international editor of Spanish Vanity Fair. In 2009, the two were named, in addition to their responsibilities at their respective Vanity Fairs, international editors at German and Russian Vogue (respectively). Did we mention they’re the only lesbian Media Power Couple on this list, and that Ms. Brant used to be married to Peter Brant? Because they are, and she did.