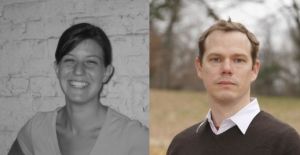 …Ms. Benedikt and Mr. Goldman together (inadvertently?) reminded us of Ms. Benedikt’s own neglected Media Power Couple status: She’s married to Mr. Cook, an investigative reporter for Gawker.com, who was recently accused by The Atlantic’s Jeffrey Goldberg of indoctrinating his wife with anti-Zionist leanings, or at the very least, attempting to. The entire thing was very funny. Mr. Cook has worked at Radar, Yahoo, and Mother Jones, and he also wrote a book about the history of Merge Records. Ms. Benedikt previously worked at the Chicago Tribune, and is now the Film Editor of The Village Voice, and together, they have two children, who may grow up to be anti-Zionist power-establishment-upturning geniuses. Or investment bankers. Who give money to the Koch Brothers.