They sit a handful of seats away from each other in the Senate chamber but that sedate distance hardly resembles what could turn into a big, smoldering political primary gulf between state Sen. Joe Kyrillos (R-13) and state Sen. Mike Doherty (R-23) as both men consider 2012 runs for the U.S. Senate.

This one would feature all of the classic delineations of national Republican Party division, in a microcosm precisely the size of Cape May to High Point – and with the additional outsized political close quarters presence of Gov. Chris Christie.

Doherty fills out the ex-Army Captain role of party maverick: a mountain man lawmaker from far-flung Warren County who endorsed Ron Paul for president, forged alliances with Steve Lonegan and Murray Sabrin, meat-hooked Marcia Karrow to snatch the state Senate seat from the Hunterdon/Warren power elite, and weathered at least one nose-to-nose session over last year’s budget with the Republican governor.

“None of the potential Senate candidates has statewide recognition, so everyone’s starting in the same starting blocks,” said Patrick Murray, political scientist and pollster with Monmouth University. “Doherty, though, is able to tap into a network statewide that Kyrillos doesn’t have access to.”

“What Kyrillos will have access to through Chris Christie are the party organizations,” Murray added.

Both men are making the circuit now – and each in his own way – as they probe their respective prospects of challenging U.S. Sen. Bob Menendez (D-NJ).

“Joe Kyrillos is a friend,” said Morris County GOP Chairman John Sette. “If he’s running, I’d be with him 99.9 – no, make that 100%. Joe was good to me when he was state chairman and his heart’s in the right place.”

“Joe is a good fundraiser and would be a very credible contender,” said his longtime running mate, Assemblyman Sam Thompson, the Middlesex County GOP chairman.

“He’s formed (an exploratory committee), but I think he’s trying to get the temperature,” said the source, who added that Kyrillos in the last number of days has worked the phones and continued to set up sit-down sessions with county chairs and other power players.

“He knows you can’t wait until next year on the fundraising side,” the source added.

A Monmouth County establishment source told PolitickerNJ.com he received a call a month ago asking him if he would vote for Kyrillos or biotech millionaire John Crowley.

“Yeah, it was when Crowley was still in the race,” said the source. “It was very clearly a poll put out there by Kyrillos or someone close to him.”

As Kyrillos taps the party power structure, Doherty continues to drill into the party’s Tea Party base.

Just Tuesday night, in fact, he attended the Bergen C-PAC convention to talk about his per-pupil funding formula that would bust up the current Abbott funding system – a strategy that has especially pitted Doherty against Senate Democrats.

“It is very important not to underestimate Mike in a Republican Primary,” said a Republican source close to both men. “Remember, Doherty was written off in that 2009 state Senate primary, the whole party put him out in the cold, and he found a way to come back and win.”

Neither Kyrillos nor Doherty will say he’s definitely running at this point, but they don’t deny they’re in aggressive exploratory stages.

“Unless the presidential race is not wrapped up by the time of the Republican Primary, you have to figure that turnout will be low and that helps Doherty, because the Tea Party will turn out, while traditional, middle-of-the-road Republicans won’t be coming out,” said Murray. “It’s still uphill for Doherty, because if Kyrillos runs, there’s no question Chris Christie will wreak havoc with the county chairs who don’t get out the vote for Kyrillos.”

That’s a much circulated point in Kyrillos’s favor.

“Look at what Schundler did,” said Morin. “I don’t know if it was Tea Party, but his disciplined campaign was certainly anti-establishment. The only county organization that endorsed Schundler for governor was Hudson, where Schundler was the party chairman.”

Ironically, of course, Schundler is now Christie’s arch enemy, having run afoul of the combative governor as the ex-commissioner of the state Department of Education.

“The difference between when Schundler ran for governor and now is we have a strong governor obviously in Chris Christie,” said Morin. “It would take a very organized anti-establishment campaign to beat someone enjoying the establishment backing with Christie.” 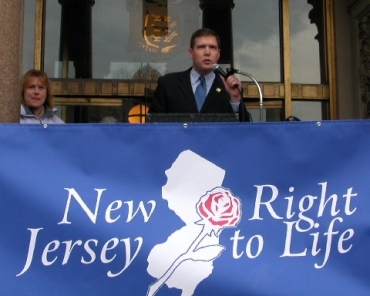