Late last month, a “rat tsunami” descended on Brooklyn, kicking up rodents on the streets surrounding the Atlantic Yards project. Neighbors in Prospect Heights and Fort Greene complained that construction of the Barclays Centre was sending rats into the neighborhood. Though a Forest City Ratner spokesman at the time suggested to The Observer that the problem was not conclusively worse than anywhere else in the city, the developer has now seen fit to pony up for some industrial strength garbage cans for neighbors as well as a tougher pest plan.According to The Brooklyn Paper, residents will get vouchers for the rat-proof receptacles, and more garbage cans have been installed on the construction site “after Health Department inspectors blamed construction workers’ poor food disposal habits for the rat problem.” Yet tireless Yards watchdog Norman Oder notes on his blog that the city seems to be blaming the neighbors, as well.

More the fault of AY, or the neighborhood?

Unresolved was the cause of the rat problems. City officials who’d recently done a walk-through of the construction site and surrounding blocks suggested that the latter had far more uncovered garbage that would attract rats–essentially leaving the impression it was more the fault of the community than of Forest City Ratner.

What has really gotten Mr. Oder’s, er, rat is that the media has paid more attention to this rodent wave than a decision last week in state court that found the Empire State Development Corporation had erred in re-approving the project in 2009, when it failed to consider that the timeline for the project had shifted from 10 years to 25.

However, he notes it will not slow down the project necessarily because the judge declined to place a stay on the construction of the arena and holds open the possibility for that to happen in the second phase; though as an article in The Times today underscores, Forest City Ratner is still short on money to even complete the apartments in the first phase, even with the help of the Chinese.

Bruce Ratner insists to the Gray Lady (his development partner in The Times’ HQ on Eighth Avenue) that “we will get the project done one way or another” and also admits that he might see the new Atlantic Yards doc, Battle for Brooklyn “eventually.” 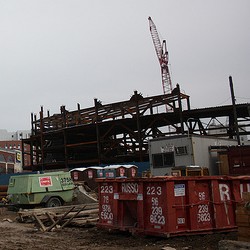