West New York Mayor Felix Roque today filed a formal challenge with the state Commissioner of Education to 11th hour appointments to the Board of Education made by outgoing Mayor Silverio “Sal” Vega.

Roque said with his three late-night appointments – a campaign manager, former chief of staff, and a political supporter – the lame-duck Vega tried to stack the Board of Education with his allies as he headed out the door on May 10.

Roque subsequently removed Daniel Ortega, the former campaign manager, from the board on residency.

His petition filed today argues that the appointments of Janet Passante and Alex Locatelli violate state law. N.J.S.A. 40: 73-5, which prohibits appointments to boards between the first Tuesday and third Tuesday in May during an election year.

“This was a desperate attempt by the defeated commissioners to overcome the will of the people,” Roque said. “It was a last-ditch effort to try and retain control of the community at the cost of our children’s future.”  Large numbers of Roque supporters have protested the board appointments at two public board meetings. During those meetings the challenged board members voted to award lucrative professional contracts and tenure to various teachers.

“I have always said that I ran for mayor to serve the people of West New York and to insure the future of our children. I am committed to making sure that qualified people are appointed to the board of education.” 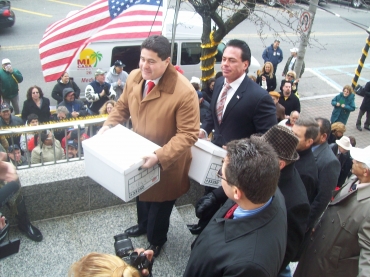