“Assemblyman [Matthew] Titone and I are going to be there handing out cupcakes and champagne — or perhaps mimosas, or bellinis,” Savino said.

By the time The Observer arrived at Staten Island’s Borough Hall at 2 p.m. on Sunday afternoon, Titone and Savino had come and gone, and the procession of couples seeking marriage ceremonies and licenses had largely tapered off.

The majority of the 38 couples who had registered to marry there had long since come through, leaving plenty of room for stragglers to meander into Borough Hall, sometimes in clothing more fit for a backyard cookout than a wedding ceremony. “That’s the beauty of the entire thing,” commented a passerby on Stuyvesant Street. “They can just hop off their bicycles and come and get married, no red tape, nothing.”

As The Observer ascended the steps into the hall, a newlywed same-sex couple practically ran down the stairs, smiling ear to ear, and jumped into a waiting Jeep Cherokee.

Outside the courthouse, Judge Charles Troia, who sits in Brooklyn but is a Staten Island native, lounged and chatted with about two dozens friends of the soon-to-be newlyweds, Charles Dominick and Robert Portas. “Today I’ve married both heterosexual and same-sex couples,” said Judge Troia. “Some have come from as far as North Carolina to get married on Staten Island today!” When Troia saw the names of his previous co-workers and dear friends on Staten Island’s list of lottery winners, he angled to preside over their wedding.

Dominick and Portas are both court reporters at the New York Supreme Court, in the criminal and civil courts, respectively. “Our wedding wasn’t planned. We signed up for the lottery, and when we found out we won, we told everyone! Our lives are very chaotic, so this really fits us,” said Dominick.  “To illustrate to you how spontaneous it is, we picked up our rings during lunch,” he bragged.

Dressed in white linen button downs and khakis, Portas and Dominick entertained a growing band of well-wishers, which eventually totaled about 30 people. “This ain’t even half of it,” said one family member. “We got even more people waiting back at the house!”

While the borough enjoys a reputation as the most conservative in the city, it has its own gay community, and both Titone and Savino pushed aggressively to pass same-sex marriage. In 2009, Savino delivered a stirring floor speech that was noticed nationally. “If my speech converted some people’s minds, I’m just happy to do that I was able to do it,” she said on Friday. “And if someone else’s did, it was all a concerted effort.”

The scene on Staten Island was a far cry from the packed courthouse in Manhattan, where hundreds of same-sex couples applied for a lottery to be married. An aide from the mayor’s office confirmed that of the 38 spots on Staten Island, some of those selected in the lottery had not arrived by 3:45, leaving several open spaces for couples who hadn’t won or even participated in the lottery to wed — including, as it would happen, several heterosexual couples.

A ragtag crew of supporters, about six in all, congratulated each couple that exited the courthouse with balloons, noisemakers, and smiles from ear to ear. “We were hoping for protesters,” said a volunteer, decked out in rainbow dressings. Alas, none were visible outside Borough Hall. “Maybe they’re getting the hint. We’re here. We’re queer. We’re married. Get used to it.” 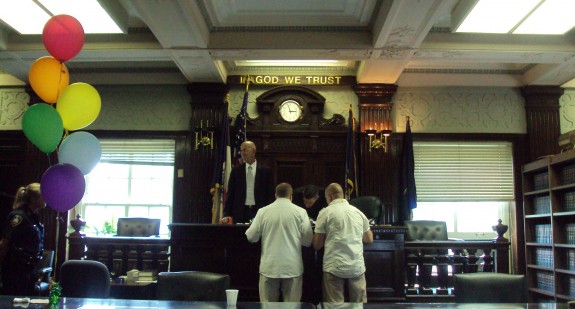