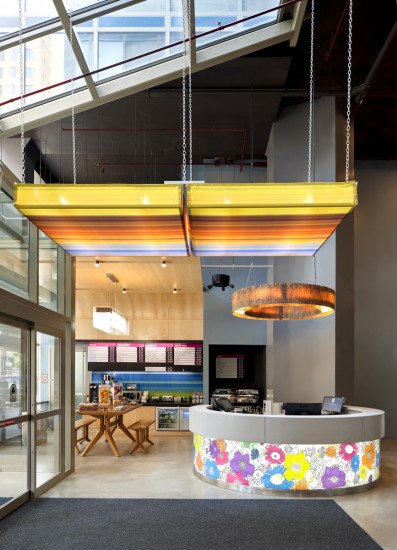 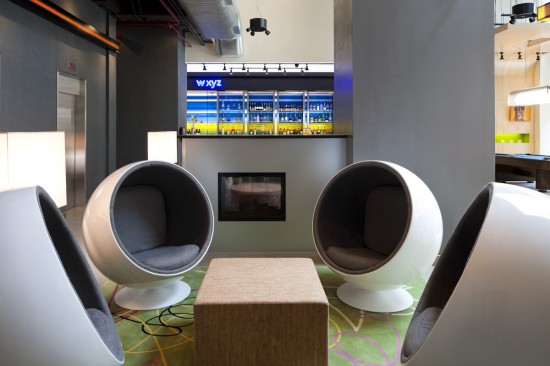 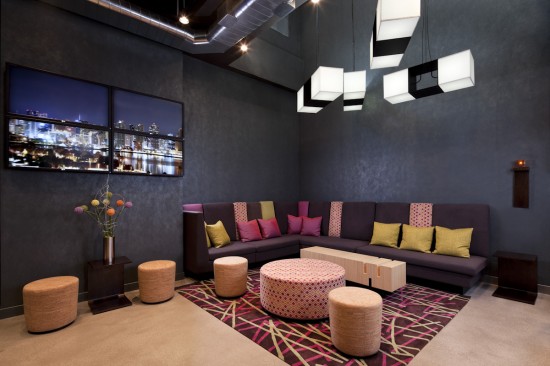 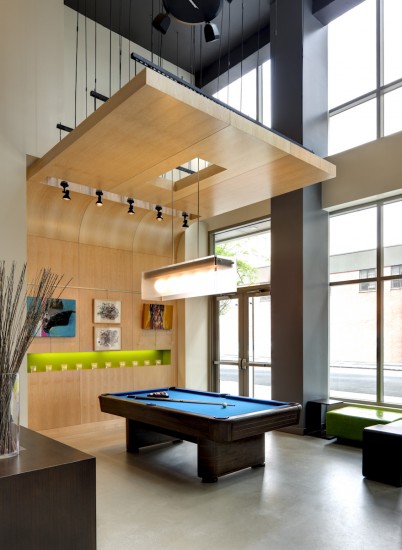 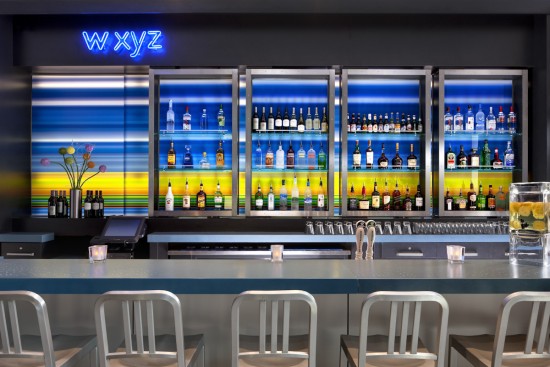 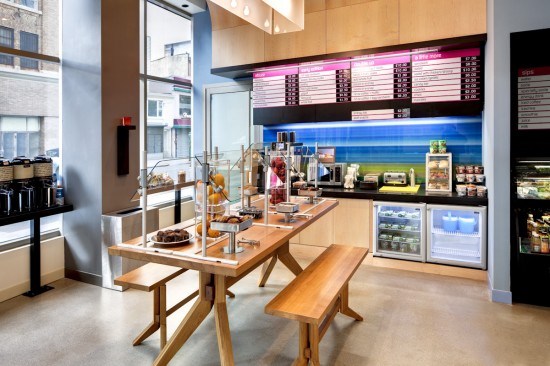 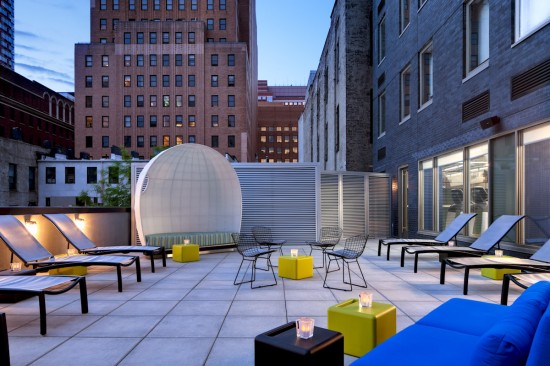 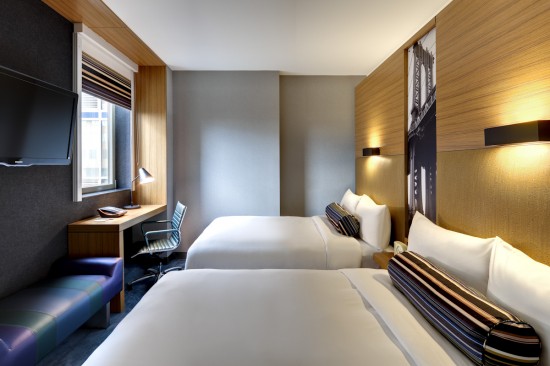 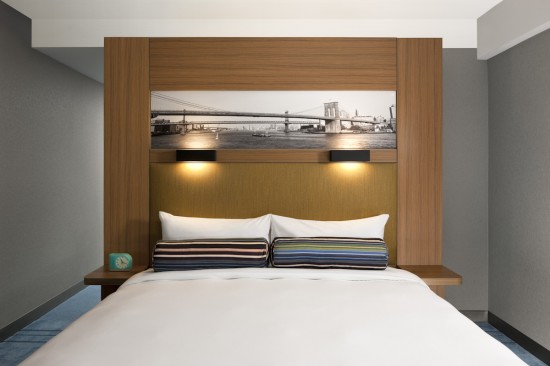 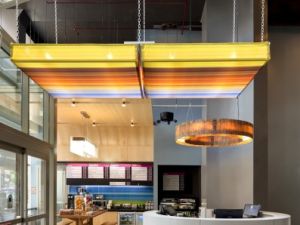 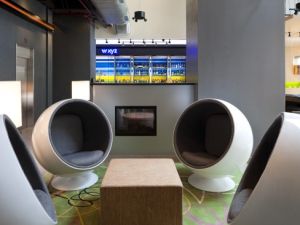 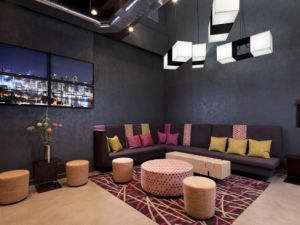 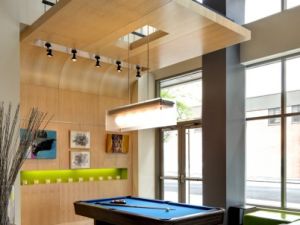 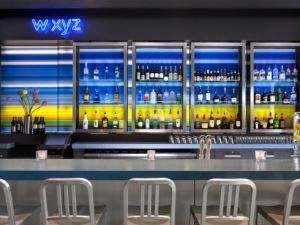 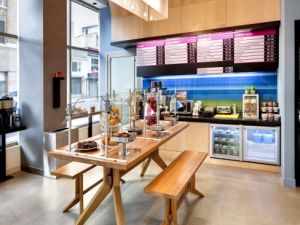 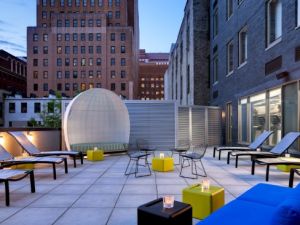 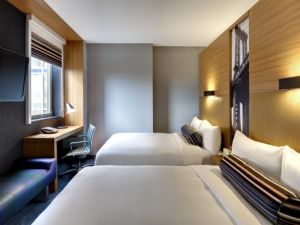 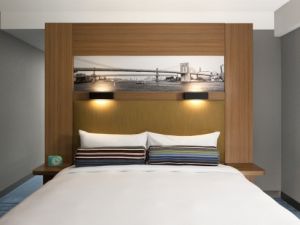 Trendy twenty-something travelers who are still hanging on to their college days will love the new, so-edgy-it’s-almost-painful Aloft hotel at 216 Duffield Street in downtown Brooklyn, which had its official opening last night.

Pod chairs, bright colors, crazy patterns, brushed steel—they really have all the bases covered. The lobby’s circular front desk features an explosion of bright pink, blue and yellow flowers; the bar is outfitted with steel cafeteria-style chairs; and the desks in the guest rooms come with “plug and play” stations that charge electronics and hook up to the 42-inch televisions (because if you’re going to be hip, you need to appeal to the techies).

In addition to the bar, the lobby also has a “grab-and-go” food station (how college) called re:fuel, groups of bold-colored couches and chairs, and a pool table. It’s like your freshman dorm on steroids; the college you always dreamed of before reality set in and you realized that most residence halls are actually decrepit and gross. Remember the completely unrealistic college dorms depicted in the PB Teen and Pottery Barn catalogues? That’s what this hotel is like.

And the vibe is definitely intentional.

“Our main demographic is Gen Y, which loves design and trendy and hip style, but is on a budget,” said Carrie Mosner, who is on the PR team for the hotel. But despite its primarily targeting that generation, Ms. Mosner told us the hotel caters to other age groups as well; “families, singles and seniors” also stay at Aloft Brooklyn. (We’re having a hard time imagining grandma feeling comfortable in this place.) The hotel has a family program called “Camp Aloft,” which provides small air mattresses for kids, and the bold design of the lobby will likely appeal to younger teens as well.

The hotel also encourages guests to gather in the common areas and socialize with each other (sound familiar?). On a tour of the rooms, Paige Francis, a member of the Aloft marketing group, pointed out that the rooms “are smaller sized because that downstairs area is programmed for hanging out”—something you have probably heard before if you’ve ever been on a college tour.

The rooms themselves aren’t any smaller than many Manhattan hotel rooms for around the same price—about $180 per night—and the style is very contemporary.

The bed(s) are backed by light wood with an “art panel” inserted (it’s probably going to be a picture of the Brooklyn Bridge in almost every room) and the bathrooms have those raised-basin sinks that are now ubiquitous in luxury apartments. The one item that seems out of place among all the modern, clean lines and sharp edges is the faux-retro clock on the nightstand (which still manages to seem cool since the retro-clock trend re-emerged).

And to seem even more trendy and stylish, Ms. Francis, the aforementioned Aloft marketer, likened the hotel to an H&M or Zara store, which are known for providing affordable fashion to cutting-edge young people everywhere. She noted: “This has happened in industries like fashion but it hasn’t happened in hospitality yet.”

So look out: Aloft might soon be taking over the world. The Brooklyn location opened June 9; another Aloft hotel in Harlem has been open since December; and the brand is also expanding to fashionable international locations such as London, Abu Dhabi and Bangkok. Perfect for study abroad, we imagine.