It will be at least two and a half years—a traffic jam between now and then holding things up would not surprise—before the Taxi of Tomorrow hits the road. Instead of the futuristic Karsan model that New Yorkers loved, the Bloomberg administration went the soccer-mom route and picked Nissan’s souped-up minivan. But the other runner-up, Ford, maybe be the winner, at least for the time being.

If anything, this is an impatient town, no one fitting that description more than our beloved, bemoaned cabbies. They have been agitating for a new cab now, apparently, and the Taxi and Limousine Commission has assented, approving the Ford Transit Connect for use at least until the Nissans are ready, according to The Journal.

“With the phase-out of the Crown Victoria, another vehicle needs to fill the gap…between now and then,” said TLC spokesman Allan Fromberg, referring to Ford’s iconic older model. “That doesn’t mean all the other cabs have to be junked” when the new standards come into effect, he added.

Unlike the Nissan vehicles, which are just going into production, the Transit Connect is an existing model in use throughout the country, according to a Ford release. Mark Fields, Ford’s president for the Americas, said, “For decades, Ford has been synonymous with New York City taxis, and we are pleased residents and tourists now will benefit from our next-generation vehicle.” Well, for the next three years at least. 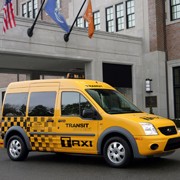