The two men in the Woodbridge mayor’s race have spent as much or more time fighting the power structures in their own parties as each other – but with very different results that give Mayor John McCormac a decisive advantage over challenger Chris Struben (pictured) in November’s general election, which is why Struben pounced on a picture of McCormac with fallen Democratic Party superstar John Lynch at a Yankees game.

“I’d like to know whose tickets they are,” said Struben, referring to McCormac’s prime time television bleachers shot with Lynch a few weeks ago. “I don’t know if the people want a mayor at a baseball game with someone who’s been in prison.”

The difference is McCormac commands a disciplined local party organization in his home town, where Democrats outnumber Republicans, 19,000 to 6,200, while Struben has the benefit of having coalesced the Tea Party vote in a GOP Primary, a base that arguably challenges his ability to appeal to the town’s 25,000 independent voters.

McCormac has the additional general election advantage of having served as a member of Gov. Chris Christie’s transition team, proudly appearing when summoned as a continuing Christie cross-the-aisle ally.

In their respective revolutionary efforts, McCormac spearheaded the more concerted movement as the supporter of labor leader Kevin McCabe for Middlesex County Democratic Committee chairman against eventual winner Peter Barnes, Sr., who had the backing of state Sen. Bob Smith and Assemblyman John Wisniewski. Struben last year himself toyed with running against Assemblyman Sam Thompson to chair the Middlesex County GOP, ruffling the chairman’s normally calm demeanor in the process and stirring the edges of the party before finally opting against a challenge in the 11th hour.

But now Struben is back as the unlikely GOP Primary victor over former Councilman Robert Luban, the deflated establishment choice.

“It was low turnout and he was able to get the ultra conservative wing of the party to turn out,” said a source familiar with Woodbridge politics. “The fact that Bob had been a Democrat made him an easier target in the primary and his campaign never got adequately organized.”

Struben racks up a litany of complaints about McCormac: the municipal tax rate has gone up 15% under the incumbent, McCormac refuses to remove a municipal judge based on a complaint Struben filed because he is a friend of the mayor’s, and, yes, McCormac’s public appearance with Lynch, who went to the pokey on a Christie prosecution.

“Woodbridge needs another voice in town hall,” the challenger, a local attorney, told PolitickerNJ.com. “One party control is problematic and leads to abuses. The current administration is not responsive to the people. They disrespect the public at meetings, especially Republicans. The Democratic council and mayor have gotten too comfortable being in control. I’m not saying there is overt corruptness but one party leads to abuse and Woodbridge needs someone to keep the balance. As mayor I’ll bring that openness to government. I won’t allow people who abuse the public trust.”

McCormac said in response to the critique, “Chris Struben was rebuked 14 times by the judge in question and that’s why he doesn’t like him. I look forward to hearing Chris Struben’s plan for Woodbridge to contend with the economic crises that Woodbridge and all of the towns in New Jersey face.”

As he tries to build support, Struben insisted it won’t matter that Luban isn’t backing him or that Thompson’s generic statement of support (“He’s the Republican candidate – he gets the same support as any other Republican candidate”) lacks accompanying force or cash.

“We’re getting very little help because their financing was stretched and he’s saddled with his own election for senate,” said Struben, former treasure of the county committee.”

Is he sure it won’t matter?

“No, I don’t think so at all,” Struben said. “Sam is going to focus on his best interest; that’s what he’s going to do.”

By contrast, McCormac’s intraparty nemesis, Wisniewski, has to campaign for re-election in the 19th District, and has and is and will be drilling into the same Democratic base in Woodbridge that sustains McCormac. On Election Day, arguably the only time when they aren’t intent on destroying each other, the unlikely duo of “Mack and Wiz” will symbiotically empower each other.

” I support John McCormac’s re-election bid and we are intent on defeating Republicans,” said Wisniewski.

The likely political overkill victim will be Struben.

Sources closes to the mayor say that as McCormac takes a run at November, he worries less about local issues than a national public disdain for incumbents. In addition to nursing his advantages, he is campaigning, say sources, just in case Struben grabs hold of a throw-the-bums-out-of-city-hall sentiment in an off year election, which the challenger argues is very real, built into his strategy – and in his favor. 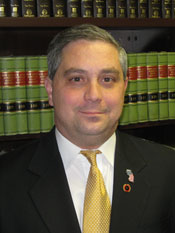