BURLINGTON CITY – In a wide-ranging press conference here following the signing of a proclamation for community health centers, Gov. Christie said he is unsure what effect the nation’s credit downgrade will have, expressed his disappointment in the steep toll hike announced last week by the Port Authority, and dismissed a recent Monmouth University poll that indicated a majority of residents want to leave the state.

“I don’t know what effect the downgrade will have,’’ Christie said. He said that candidly, much of the rationale behind the decision is political.

He said that realistically, “I don’t think any of them are worried that we’re not going to pay our debt.’’

He said that credit agencies received the state’s most recent information well, particulary in light of the recent adoption of pensions and benefit reform and the fact that the state has cut its reliance on non-recurring sources of revenue from 13 percent in the Corzine years to 2 percent now.

He said that he is not speaking for New York Gov. Cuomo, but neither one of them have signed off yet on the proposed Port Authority hike.  Either governor can veto the move.

“We are speaking on a regular basis,’’ he said.

In response to a question of what his response was when informed of the pending toll hike, he said he told the authority officials: “’You’re kidding,’ that was my response.’’

He said this is the result of years of the authority unwilling to budget effectively, but their officials told the governors they had to move quickly to save thousands of jobs and hundreds of projects.

“This is testimony to the mismanagement of the Port for years. We shouldn’t have to be in this kind of situation,’’ he said.

Monmouth University turned out a poll that stated 50 percent of the residents want to leave the state, to which Christie jokingly remarked, “Thank god for those other 49.’’

As he often does regarding polls, Christie said he does not spend a  lot of time being concerned with them.

“They change so frequently,’’ he said.

Continuing in a lighter vein he said that under Gov. Corzine probably 70 percent of the people wanted to leave.  “He’s left, too,’’ Christie joked.

But more seriously, he touted the 2 percent tax cap as one of the changing conditions that encourage businesses and residents to stay.

Lawsuits on pension and benefit reform

He called lawsuits in opposition to the pension and benefits reform “incredibly shortsighted.’’

He said his administration took a system headed toward bankruptcy and put it on the road toward solvency.  Christie said that the fact plaintiffs would rather have a more generous but insolvent plan tells you what you need to know about their priorities.

In particular, he said the judges “should be ashamed of themselves’’ for filing a suit.

“In the first six months they exhaust what they put in,’’ he said, and after that it’s on the taxpayers’ backs.

“They should shut up and say thank you to the taxpayers,’’ Christie said. 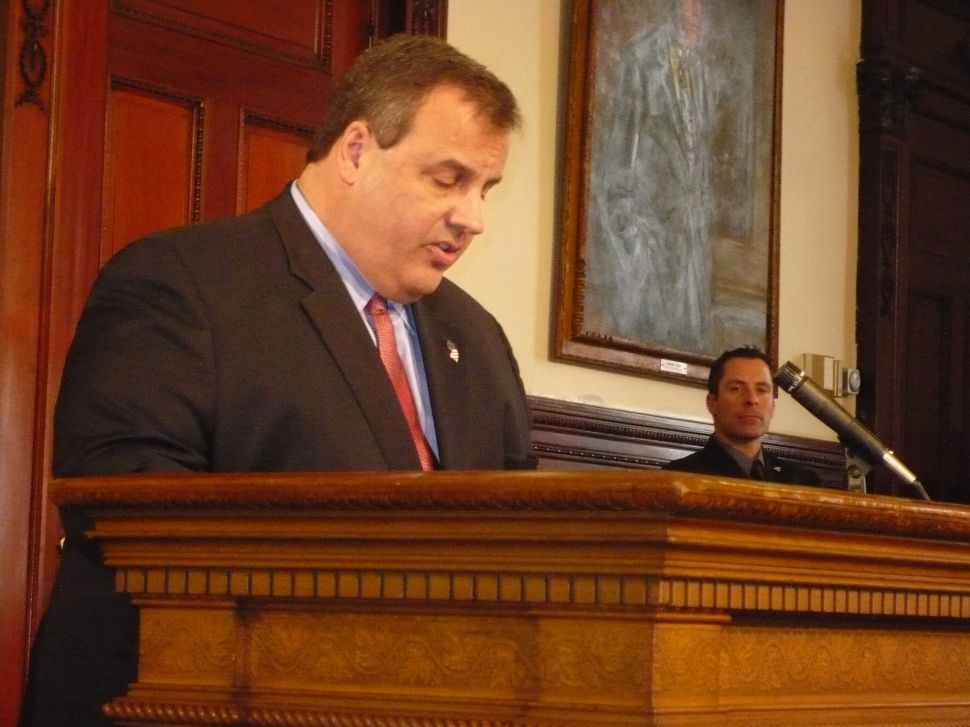