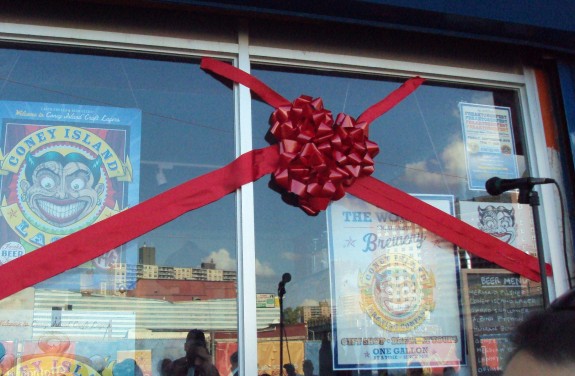 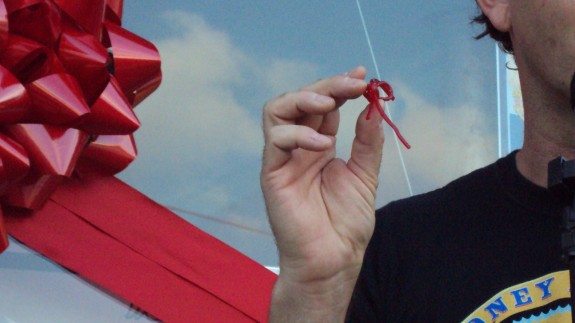 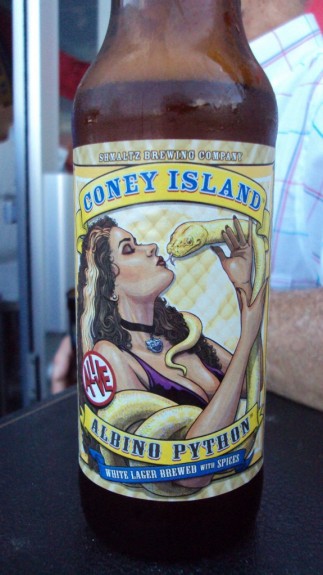 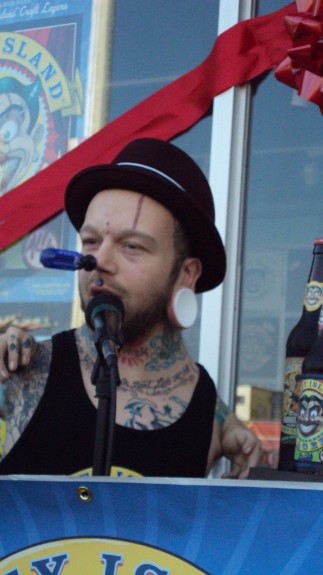 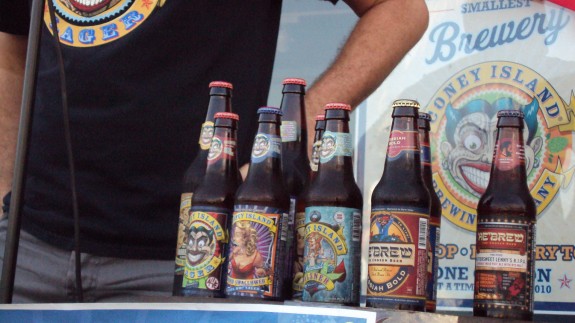 The Beers are out! (Observer) 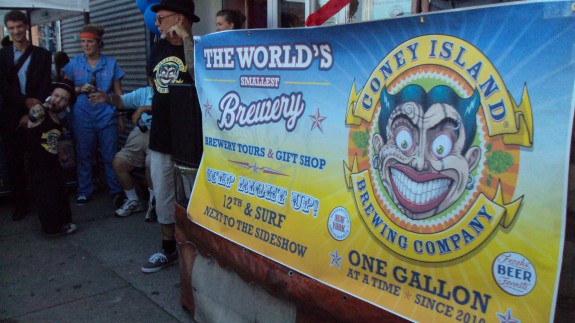 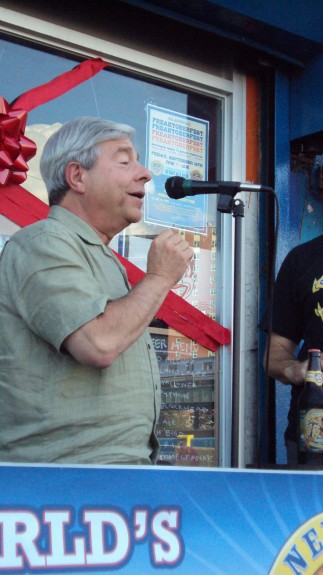 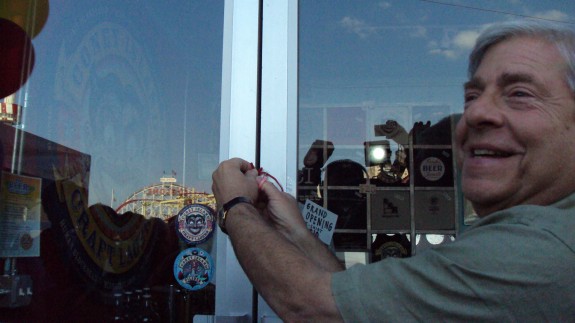 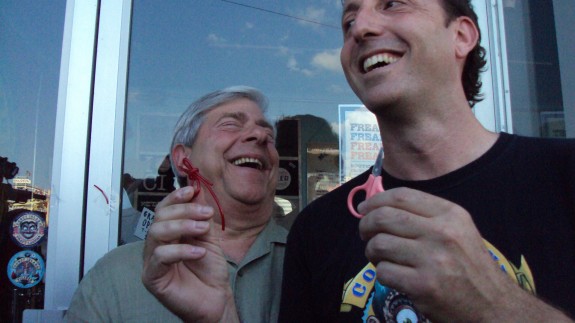 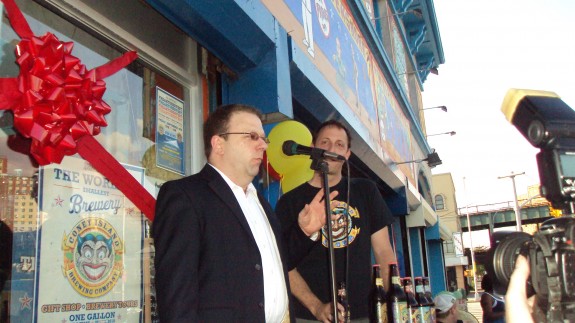 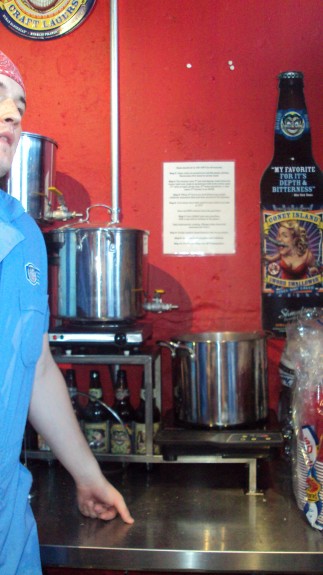 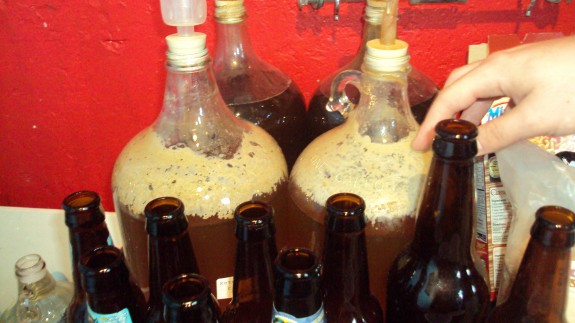 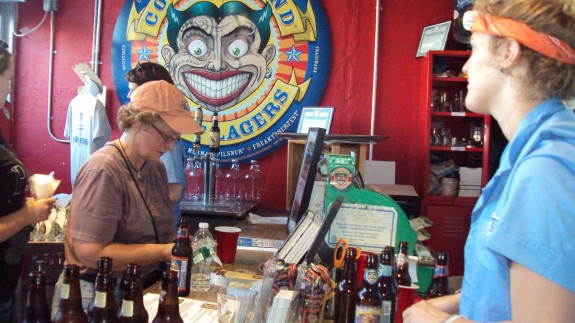 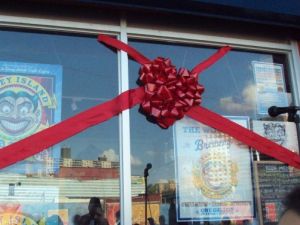 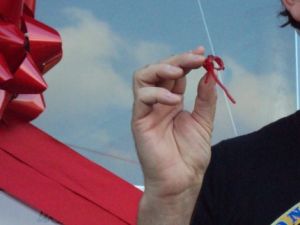 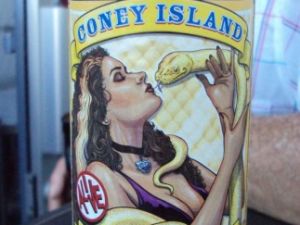 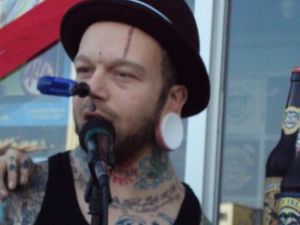 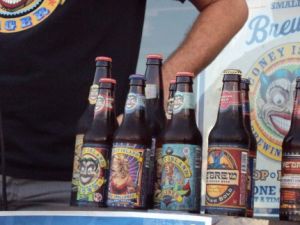 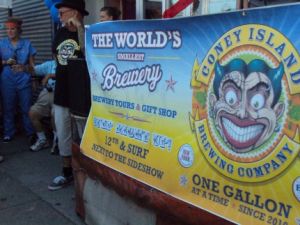 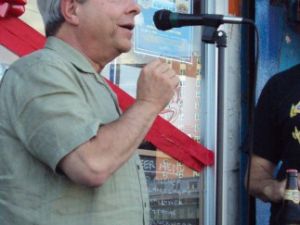 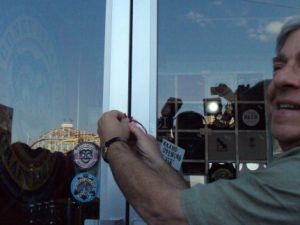 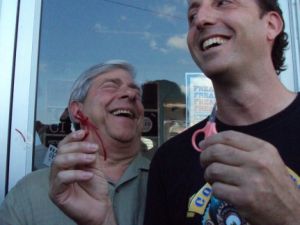 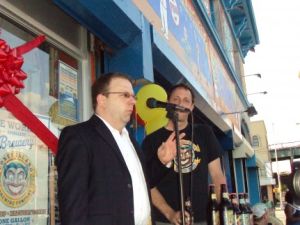 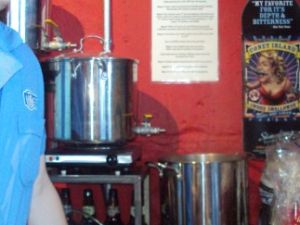 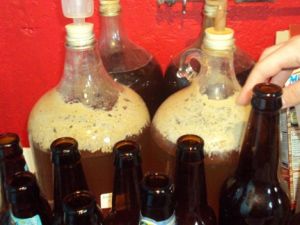 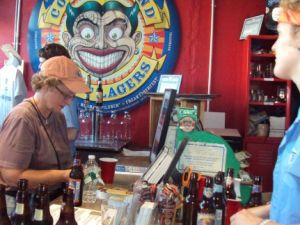 Coney Island’s reputation for iconic shtick as big business just received a highbrow boost, as  Coney Island Brewing Company celebrated the beginning of their second year of business and the operation of a fully-licensed in-house brewing system, with the cutting of the world’s smallest brewery opening ribbon (a piece of Red Vine licorice, naturally).

The event had the air of a slightly drunk three-ring circus, complete with a brass band as well as a freak act: the “painted penguin”—a Coney Island staple—performed a classic “blockhead” routine, shoving a screwdriver up his nose through to his skull before removing the tool and licking it clean. “Delicious,” he smiled. Brooklyn borough president Marty Markowitz  and Shmaltz Brewing Company proprietor Jeremy Cowan were on hand to mark the occasion as well.

When word of “free booze” spread throughout the sparsely populated boardwalk on Wednesday evening, a small crowd of young-looking men assembled near the Observer. “Is the beer really free?,” one gentleman inquired.  We assured him it was. “Is it good?” He waited for an opinion, then decided, either way: “It’s free, so I’m in.” Such seemed to be the shared consensus of many attendees, several of whom admitted their RSVP was contingent on the promise of free “exclusive” ale.

“It’s not every day you’re allowed to drink on the boardwalk,” remarked one passerby, clutching a frothy bottle of “Albino Snake” flavored beer.

In June , Shmaltz’s Coney Island was given the legal go-ahead to brew beer and become the smallest commercial brewery in the world! The retail component of Coney Island Brewing Company has been open since May 2010, selling shirts and Coney Island-inspired lagers.

After presenting Mr. Cowan with an official proclamation declaring August 10, 2011 “Coney Island Brewery Company Day,” Mr. Markowitz made his way inside the 175-square foot brewery/ storefront, to pick up a special case of He’Brew beer for his wife. “I never touch the stuff,” he called over his shoulder to the Observer. “But she loves it. ” The brewery produces 1 gallon of beer at a time, using Bunsen burners, hot plates, and old-timey mechanisms that cast a Prohibition-style moon-shine vibe over the entire operation.

“Mayor of Coney Island” Dick  Zigun couldn’t’ pinpoint his favorite Coney Island brew, neither could Mr. Cowan. “It’s like choosing between your kids,” Mr. Cowan said with pride. “I had a really bad experience with “Blockhead” flavor, Mr. Zigun revealed. “It has an incredibly high alcohol content for a beer (almost 12%). I’d be embarrassed to tell you what happened.” Mr. Zigun and Mr. Cowan exchanged knowing glances.

As the Observer headed for the Q train back to Manhattan, a platinum blonde (extensions) woman with leathery skin with blue eyeshadow smeared across her lids introduced herself as “Vera,” and then proceeded to lament the changing nature of her surroundings.

“I hate Coney Island,” she muttered, with a Marlboro hanging out of her mouth. “It’s all yuppified. Craft beers on Coney Island. What’s next? It’s supposed to be the underbelly of America, the compulsion to see freaks, not buy shitty beer with freaks on the bottles.”

She finished:  “This is so Brooklyn.”