Burlington County Republican leadership is full of “pirates” concerned only with their own power and have taken the party in the wrong direction a former county GOP chairman said in an interview Tuesday.

Former Burlco Republican Chairman Garfield DeMarco, who built the party into a statewide force during 17 years as its chairman, said party leadership “lacks imagination” and has kowtowed to “extremists” in an effort to stay in power.  DeMarco said the current leadership is out only for themselves and not the GOP or its causes. The recent resignation of Assemblyman Pat Delany over an email sent by his wife is a prime example of the party’s recent woes, DeMarco charged.

“All they care about is political power,” said DeMarco who left as chairman of the Burlco party in 1990. “The leadership is not based on any public service or what’s best for the county or citizenry. It’s based on maintaining political power. The public good doesn’t matter.  They don’t want well-intentioned candidates, they want rubber-stamps who will allow them to pillage and plunder.”

For his part, current Chairman Bill Layton called DeMarco’s claim ludicrous and said he has worked to build a party that includes all Republicans, from the most moderate to the most conservative.  Layton said he has never used his position for personal gain and takes issue with the assertion that the party is off the rails.  The current party is more diverse than ever, Layton said.

“The party has changed a lot since Garfield was the chairman 25 years ago,” Layton said. “If you look at the Demographics of the county it’s not the same county. But to say we’ve embraced extremists? Just look at the candidates we’ve chosen and positions they have taken.”

Other party members question DeMarco’s motives in coming out against the current leadership with just two months left until the general election.  DeMarco has spoken publicly in favor of 8th District Senate candidate Carl Lewis and some believe the former chairman’s vitriol is an effort to push Lewis’s cause.

Others say DeMarco is irrelevant after a long absence from party politics and has skeletons in his own closet that make his remarks hypocritical.

But the issue surrounding  Delany’s abrupt resignation is a prime example of poor leadership, DeMarco said Tuesday.  Delany resigned from the office he was appointed to earlier this year after his wife sent a racially charged  email to Lewis.

“Imagine having dark skin and name recognition and the nerve to think that equalled (sic) knowing something about politics,” the email response to Lewis said in part.

Jennifer Delany sent the missive in response to a blast email from the Lewis camp.  In a statement issued after PolitickerNJ reported the email, Delany said he was “deeply disappointed” in his wife’s choice to send it.

“It does not reflect my personal beliefs whatsoever,” said the former assemblyman from Lumberton. “In an attempt to repair the serious damage this has caused to our marriage, and to protect our kids from public humiliation, I decided to leave public life.  On behalf of my family, we sincerely apologize to Mr. Lewis for any pain this caused him.”

DeMarco said while he was in charge, a candidate such as Delany would never have been on the ballot.

“We knew there were issues with him and his association with extremists in the party,” DeMarco said.

Delany, Demarco said, was involved last year in an effort by one conservative group to ban a book of essays penned by homosexual students from the shelves of the county library.

The book, Revolutionary Voices: A Multicultural Queer Youth Anthology, was the subject of ire from conservatives in Burlington County, among them members of former Fox News personality Glenn Beck’s 9.12 group.  Delany was on the library board at the time and according to several published accounts, was among the board members who agreed to have the book removed from the library without following the library’s normal procedure for removing a book.

According to DeMarco, the Burlington County Republicans he knew would never have embraced censorship.

“We would never have supported a candidate who was involved in that,” DeMarco said. “And he never would have been a candidate.”

As for the book’s removal , Layton said it is old news and was rehashed at the time of Delany’s appointment.  Nevertheless, Delany is gone he said, and now irrelevant to the 8th District campaign.

But as far as DeMarco is concerned, Delany is a symbol.

DeMarco accused Layton of bending to the will of the far right in appointing Delany to the Assembly seat when it was vacated by current Sen. Dawn Addiego.  In order to avoid a primary battle from the right, DeMarco said, Layton approached the right wing of the party to ask for a candidate they could bless.

“The  reason why you have a candidate like Delany is that the objective on the part of these guys is to have control at any cost,” he said. “They will propose and make any kind of arrangement they can. If they feel that affiliating with the fanatics will increase their power they will.”

Layton denies that is the case and said his meeting with the right wing was about inclusion, not kowtowing.

“In a county like Burlington, where Democrats outnumber us, you have to work with different constituencies within the party and reach across the aisle sometimes. I do it, Glen Paulsen did it and Garfield DeMarco did it when he was chairman.”

Retiring Assemblyman Joe Malone also defended the current party and said he has no idea what Garfield is talking about.  The party is filled with elected officials and candidates up and down the political spectrum, Malone said, as it was in DeMarco’s day.

Former County Chairman Glenn Paulsen, who took over for DeMarco and counts him among his mentors, said Layton has carried on the tradition started by DeMarco.

“Garfield DeMarco built the party and I hope I contributed to the party and continued the principles and I believe Bill Layton is continuing that in a much tougher environment than even when I was chairman,” Paulsen said.  “All we want to do is build on that tradition.”

Layton invited the former chairman to express his views in person.

“I would welcome Garfield’s input if Garfield, who has not been involved in the party in any way, wants to call me instead of talking through the (media). I’d be happy to talk to him.” 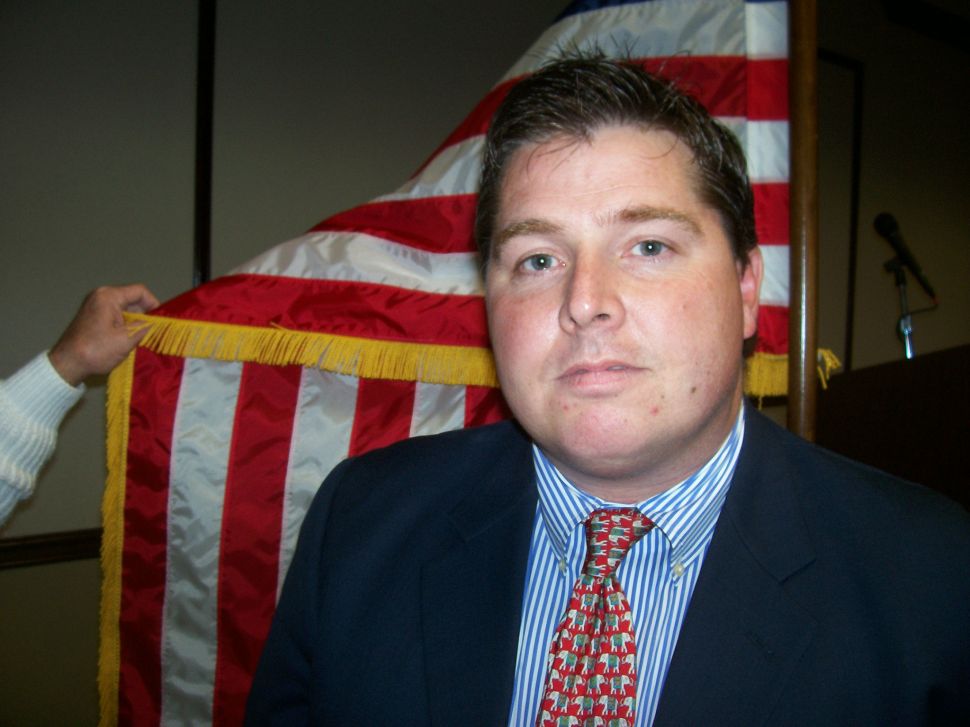