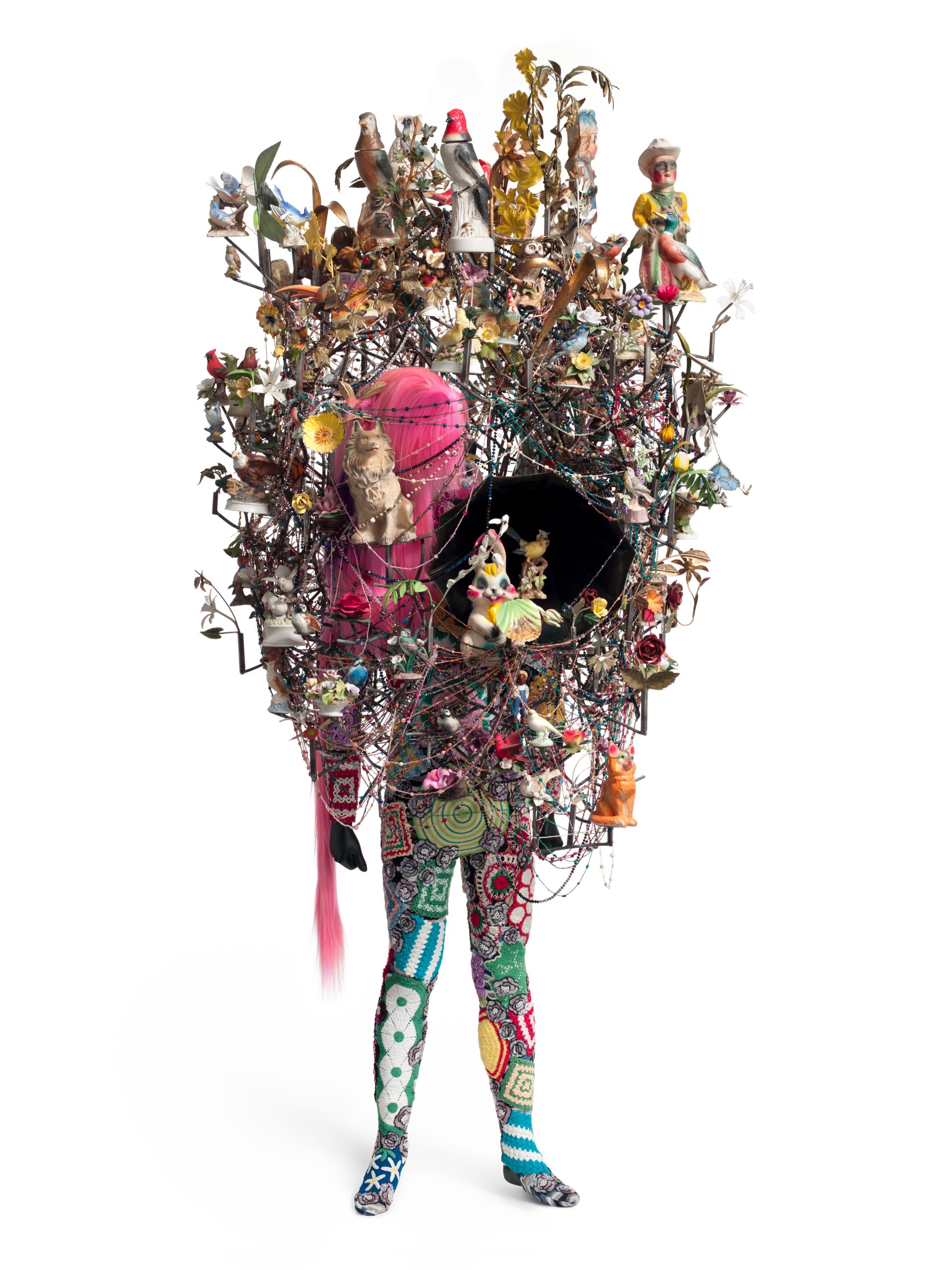 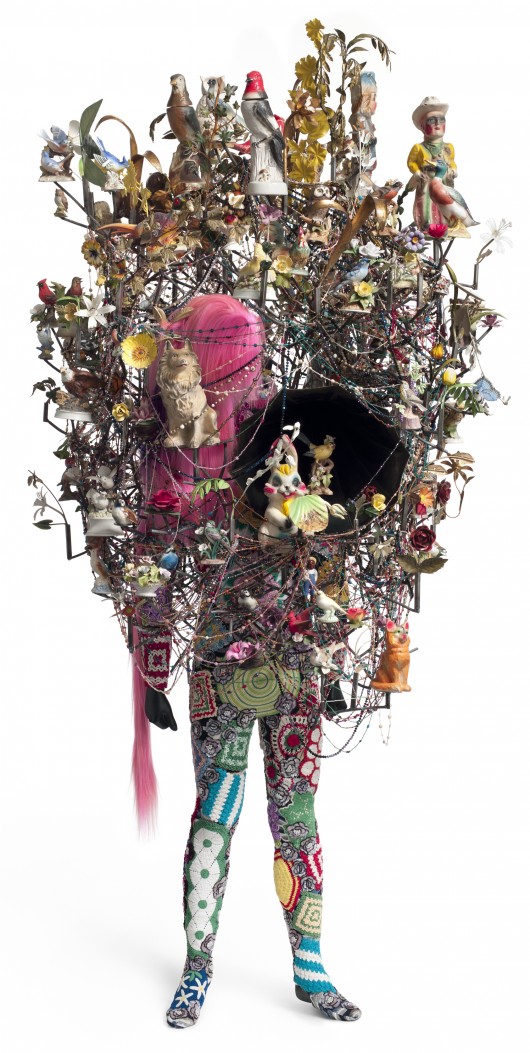 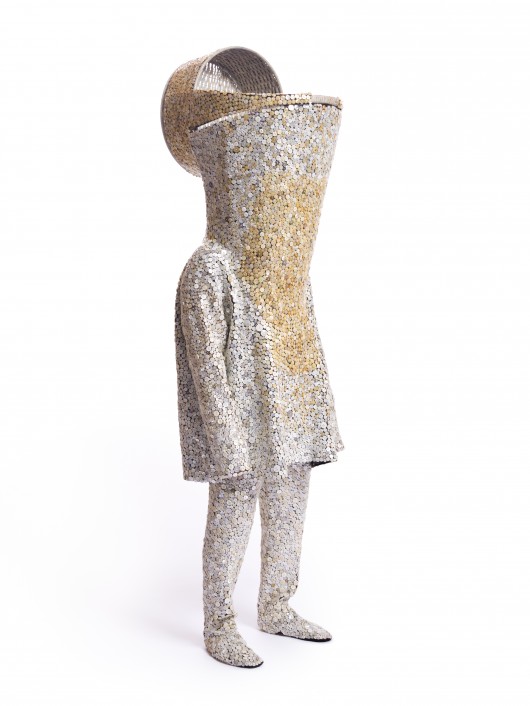 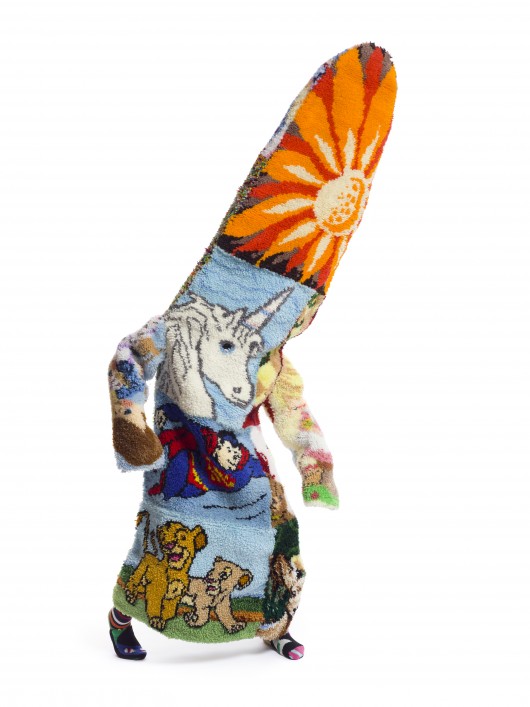 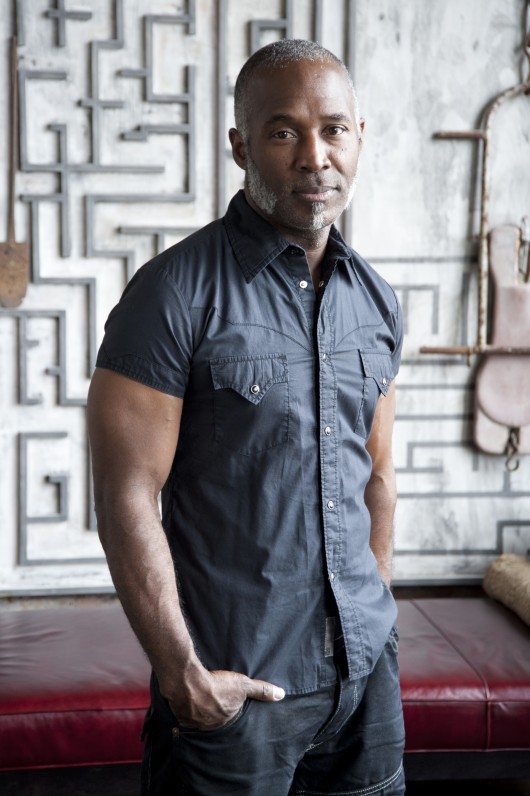 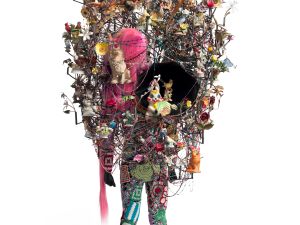 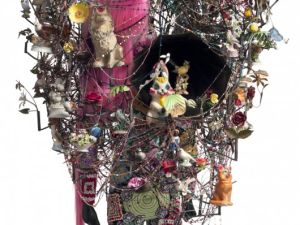 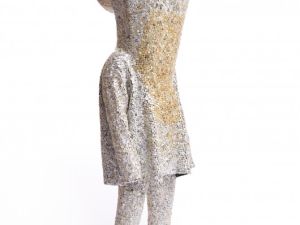 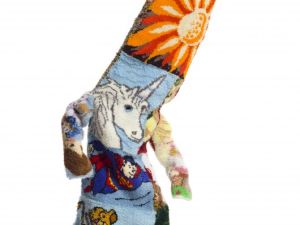 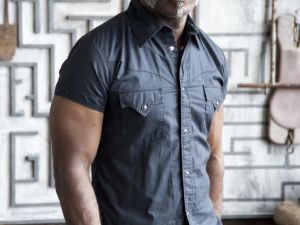 Mr. Cave was speaking on the telephone from Chicago, where he has been working for two years on pieces for two shows that will run simultaneously at two prominent New York galleries in September. He and his assistants were packing up the last of his sculptures. The latest milestone in his rapidly rising career was only a few weeks away: the exhibition at Jack Shainman, his dealer of six years, opens Sept. 8; the other show, at Mary Boone Gallery, on Sept. 10. “We’re coming down to the wire right now,” the artist said softly, without a hint of concern in his voice.

“I’ve been looking at the pipe cleaner as a structural component to build volume and shape,” Mr. Cave continued, explaining his enthusiasm for that humble object. “It becomes a sort of bone on which one can make the skin.”

As his choice of words suggests, Mr. Cave’s work is intimately and intensely corporeal, particularly the works he calls Soundsuits—intricate, often ornate sculptures in the shape of bodies that he has constructed for almost two decades from materials like crocheted hats, knitted sweaters, plastic sandwich bags, hot pads, sequins, buttons, beads, ceramic birds and other items that he finds at thrift stores, flea markets and estate sales.

The Soundsuits are hollow. While they are displayed on mannequins in galleries and museums, in archival photographs they are worn by Mr. Cave, and they are sometimes used for performances created by the artist and others. Their name derives from the fact that, when they are worn, they double as strange, alien instruments. Those covered with synthetic hair give off light swooshes. Others, fitted with metal toys, clink and clank and crackle like broken bells.

“I’m totally consumed by the special attire that has a powerful and meaningful purpose within a culture,” Mr. Cave said. “I’m looking at rituals and ceremonies: Mardi Gras, Indian clothing, West African pieces, Carnival in Trinidad.”

The moods his works conjure are as multifarious as his source materials. They are often effervescently colored and topped with bulbous, phallic heads. They can be cartoon-like and uproariously funny, but they are also just as frequently disturbing and enigmatic. Mr. Cave refers to them as “armor, a second skin,” and they seem designed to shield and protect a wearer’s identity at least as much as they are meant to entertain.

Despite the joyous, extroverted appearance that many of them have, they share a sobering origin story. Mr. Cave, who is black, has said that he produced the first example while thinking about the Rodney King beating. He collected twigs from a Chicago park, drilled holes in them and threaded them together to create a sculpture of a man. And then he climbed inside.

Until about five years ago, Mr. Cave, 52, was a relatively little known artist. He had taught in the fashion department of the School of the Art Institute of Chicago since 1992 and had a number of shows at mostly regional and university museums, but he didn’t show regularly at commercial galleries. “I was like a Gypsy,” he said. “I would do exhibitions and then pack up my stuff and go.”

“It was important for me to find someone who understands my vision and understands how I work and what I do,” he added. “I’m not that desperate to be part of a gallery.”

In the mid-2000s, Mr. Cave’s friend Greg Cameron, who was the associate director of the Museum of Contemporary Art Chicago at the time, sent a package of the artist’s work to Jack Shainman, a New York art dealer who was already showing work by a handful of black artists at his gallery on West 20th Street.

“I was just blown away,” Mr. Shainman told The Observer of seeing Mr. Cave’s work for the first time. “It was so personal and so much his own. It felt really new.”

Mr. Cave happened to be visiting New York when he heard of Mr. Shainman’s interest. “I visited the gallery, but I didn’t tell them it was me,” he said. “I wanted to see if I had a good feeling about it.” He did. After returning to Chicago, he called Mr. Shainman.

The artist’s first show at Mr. Shainman’s gallery, in 2006, was well received, with New York Times art critic Roberta Smith writing that Mr. Cave’s works “fall squarely under the heading of Must Be Seen to Be Believed.” His second outing, in 2009, also earned largely favorable reviews and his Soundsuits sold in the range of $45,000 each. They’ve gone up in price since then: in his September shows, they will be offered at $85,000 to $125,000.

“Ever-After” is the title of the show at Shainman. “It’s about death and mortality,” Mr. Cave said. “It’s very morbid, peaceful and tranquil.” Many of the suits in the show are white, some meticulously embroidered with hundreds of gleaming buttons. “It is an exhibition that talks about the afterlife, those who have moved on and forever after will be in my heart,” he said.

One group of suits, collectively titled Speak Louder, features suits with tuba-shape heads, their fronts filled or blocked with various fabrics—there are dark holes or blank spots where faces should be. “It’s a piece about speaking and not being heard,” Mr. Cave said.

He said that he wants to create a performance and video that will involve a 20-person gospel choir wearing some of the suits from the show, supplemented by others, and singing a gospel hymn. “Whew!” he said, with the faintest drawl, a holdover from his childhood in Missouri. “It’s going to be a lot of work.”

“That sounds fantastic,” said Mr. Shainman said after The Observer told him of Mr. Cave’s latest plan. “I love gospel.” He seemed unsurprised that Mr. Cave’s project was growing in scale; it usually does. “He’s incredibly ambitious,” he said.

The other September show, at Mary Boone Gallery’s soaring space on 24th Street, is called “For Now.” It’s the first time Ms. Boone is exhibiting the artist’s work and is a one-off collaboration with Shainman.

“Mary and I both loved Nick’s work when we saw it at Jack’s and at various art fairs,” Ron Warren, partner at the Mary Boone Gallery, told The Observer. “We approached Jack about doing a show, because we had the space to offer Nick the ability to do something on a larger scale.”

A decade ago, that ostensibly friendly suggestion might have been met with suspicion. Then, Ms. Boone, like many of her competitors in the upper echelon of the New York art world, was known for luring artists away from their longtime dealers. In the 1980s, for instance, Richard Artschwager and Troy Brauntuch left their representatives—Leo Castelli and Metro Pictures, respectively—for her gallery. (They have since moved on to other powerhouses: Mr. Artschwager to Gagosian and Mr. Brauntuch to Friedrich Petzel Gallery.)

But her strategy appears to have changed in recent years. This past season the gallery hosted, and helped finance, a show by Argentina-born artist Mika Rottenberg, who is represented by Nicole Klagsbrun, and staged a two-gallery show with American artist Phoebe Washburn, who works with Zach Feuer. Both are critically acclaimed artists who work frequently with installations, and both were born in the 1970s, placing them far afield of the predominantly older, male Neo-Expressionist painters whom Ms. Boone is best known for showing.

“It comes from the desire to show artists we admire without looking to take them away from their dealers that they have a long relationship with,” Mr. Warren said, explaining the gallery’s interest in collaboration. “We approach the dealer and see what we can offer them, what we can bring to the table.”

It turned out that what they could offer Mr. Shainman was higher ceilings. Mr. Cave had been talking with his dealer about making taller pieces, but the gallery’s ceilings are only 13 feet high. “Her space is so grand, and it seems like an interesting opportunity,” Mr. Shainman said.

Mr. Cave has big plans for his show at Mary Boone. His newest suits are emblazoned with images of a unicorn and Superman and laden with objects like a xylophone and ceramic birds. There are new twigs and, yes, pipe cleaners. “I’m pulling out the kitchen sink and everything around it and making it happen,” Mr. Cave said in a staccato burst. “It’s very playful, it’s whimsical, it’s animated, it’s colorful, it’s performance, it’s dramatic.” It is perhaps a happy coincidence that his show opens during New York’s fashion week. “It’s queer, it’s loud, it’s fashion, it’s pop culture.”

That word—performance—kept coming up again and again as we spoke, and it became clear that Mr. Cave uses that term in the broadest possible sense. He said that he continually asks himself, “How does my work perform out in the world?” That question suggests possibilities beyond simply wearing a costume to pose for photographs or letting a choreographer like Ronald K. Brown create dances incorporating the Soundsuits.

Recently Mr. Cave has been traveling around the U.S., introducing people in cities like Seattle and Memphis to his Soundsuits and working with them to create performances of their own. He’s interested in having his Soundsuits perform as social connectors, tools for bringing people together.

Their construction also carries meaning, according to Mr. Cave. “These suits are an amalgamation of surplus things that have been discarded,” he said. “Basically everything that I’m using has been used, and I’m elevating these things. It’s about creating work with a conscience.”

The Soundsuits that are sold in galleries are typically conceived as sculptures, not as wearable costumes, which differentiates them from expressly interactive art like Franz West’s Pass-stücke (Adaptives) or Franz Erhard Walther’s Handlungsstücke (Action Pieces). But when displayed on mannequins, they nevertheless express a potent optimism about the mutability of personal identity. Viewers can imagine slipping inside of one of the suits and becoming someone—or something—else.

“I want to provide them with transitional experiences,” Mr. Cave said. “It’s about providing a moment of silence, and at the same time asking, ‘Come out with me and play.’”