LAWRENCEVILLE – Don’t get him started.

Having felt the sting of his own party in a variety of ways, Assemblyman Reed Gusciora (D-15) isn’t willing to go the way of state Sen. Brian P. Stack (D-33) or state Sen. Teresa Ruiz (D-29), who seldom see a controversial initiative driven by Gov. Chris Christie that they don’t embrace.

But the progressive Democratic assemblyman from Mercer doesn’t mind admitting of the Republican governor, “He’s the only one who will talk to me.”

He and Christie bonded on medical marijuana, at precisely during the time that Gusciora’s own party was trying to consign him to political roadkill, in his view. “In between not getting committee assignments and redistricting,” he said.

For the record, Gusciora thought his experience warranted more serious consideration by Speaker Sheila Oliver, (D-27), for his appointment to the chairmanship of the Assembly Judiciary Committee. He also wasn’t expecting to be excised out of the 15th District when redistricting commissioners plucked Princeton and reconfigured it in the more Republican 16th District, home of state Sen. Kip Bateman, (R-16).

The irony is that part of what drove Gusciora into Christie’s friendly range is he doesn’t believe his own party’s leadership has fought Christie hard enough on the issues.

He said he doesn’t believe, for example, that Democrats fought hard enough or smart enough through the negotiating process to extract a millionaire’s tax.

It hasn’t prevented him from speaking in friendly terms, in stark contrast to his running mate, Assemblywoman Bonnie Watson Coleman, (D-15), who did not attend Christie’s bill signing.

Christie routinely criticized Watson Coleman over her early-inmate release legislation, sparking an intense debate between the governor and the veteran assemblywoman.

The presence of Gusciora and state Sen. Shirley Turner, (D-15), in easy proximty to the Republican governor with Mercer grasslands underfoot finally clashed with the absence of Gusciora’s assembly mate, Watson Coleman.

“I do agree with the governor on open space and farmland preservation, that those issues should be done in a bipartisan way,” Gusciora told PolitickerNJ.com. “I still question the Democrats’ deliberately taking Princeton out of the district; not a bright move by the Democrats, where this is an important base for Obama. A case in point: Republicans have put up their first serious candidate in recent memory for mayor of Princeton.” 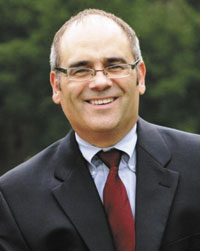