On a recent morning in the fifth-floor conference room of the Metropolitan Transit Authority’s brick and limestone Madison Avenue headquarters, a public meeting of the board was called to order. The various members representing the audit, governance, bridges and tunnels, finance, and other committees listened patiently as Mark Shotkin, a member of the transit-riding public, made a statement. “Jim and Andrew, your ties are very nice,” he began, spreading a little sugar around the room. “Nancy, your-your-your jacket is very nice,” he added, grinning at Nancy Shevell, the bus committee chairman. Then he got right to the point: “Good morning, everybody, um, garbage and graffiti on platforms and trains—totally disgusting.”

Ms. Shevell, who is tall with raven hair that swings glossily from side to side, wore a striped gray and white sweater, black jeans and sandals, along with an indulgent smile. Having served on the M.T.A. for 10 years—spanning four governors—the trucking executive was plainly at home in the boardroom. There was little indication that she is living something of a Cinderella-at-the-ball moment these days. The New Jersey-born daughter of a trucking company owner, she is now betrothed one of the world’s top recording artists, Sir Paul McCartney. Except for the 1925 Cartier solitaire diamond engagement ring (said to have set the Beatle back some $650,000) sparkling on her left hand under the stark fluorescent lighting, however, the future Lady McCartney still seemed like a Jersey girl—an exceedingly self-possessed, relaxed, collegial and well-manicured Jersey girl, but still.

You don’t meet a prince without a fairy godmother, and Ms. Shevell’s romantic coup—he may not be John Lennon, ladies, but he’s not Ringo, either—is said to have been engineered by no less formidable a yenta than The View’s Barbara Walters, who happens to be her second cousin. “Barbara was her emotional confidante and played matchmaker,” a friend of the couple told The Observer. “She gave numerous dinner parties for them and always made sure to invite people she knew that Paul would want to meet.” The friend added that the broadcast vet also coached Ms. Shevell on how to behave around the musician, helping her to beat out a number of other aspirants for Mr. McCartney’s eye, including Rosanna Arquette. Ms. Walters’s strategy was clear: Look at Heather Mills, and do precisely the opposite. “They took a page from the old regime and made sure not to make the same mistakes.” Among other shrewd moves, Ms. Shevell has made a point of wearing Stella’s designs to various parties, ensuring maximum press coverage (Ms. Mills had done the same thing, but Ms. Shevell is said to have done it with more sincerity and panache). She has also pulled back when the media attention heated up. The couple shunned the press at the recent Costume Institute Gala, and at a New York City Ballet party (Sir Paul has collaborated with Peter Martins to write the musical score for a ballet debuting this fall), she tried to steer clear of photographers, one told The Observer. “She told me that she didn’t like to have her picture taken with people she didn’t know,” he said. “And she mentioned that she wasn’t used to the attention.”

Ms. Walters was asked about her role as matchmaker. “We are very close,” she told The Observer, somewhat coyly. “Nancy is like a second child to me. Her two aunts died of cancer. She’s struggled in her life.”

No wonder Mr. McCartney likes her.

Nancy Shevell grew up in a Jewish family in Edison, N.J., the middle daughter of Myron and Arlene Shevell. Myron is the owner New England Motor Freight (NEMF), a large haulage company that does more than $400 million in annual revenues. Like Paul’s first wife, Linda McCartney, Arlene fought breast cancer (she died in 1991); Nancy is a survivor of the disease.

The Shevells have been in the trucking industry since the 1920s, when the family business transported seafood from the New Jersey coast to New York (shades of Boardwalk Empire). During the 1960s, Myron started his own business with his brother, Daniel, but they ran afoul of government investigators, and in 1975 were charged with fraud for alleged involvement with the Mafia. The case never went to trial, but the brothers were forced to surrender control of company and went bankrupt. Later that year Daniel Shevell, aged 39, fatally shot himself. In 1988, after buying the struggling trucking company NEMF, Myron Shevell was accused of colluding with Vincent Gigante, the head of the Genovese crime family. It was claimed in a racketeering lawsuit that Mr. Shevell made illegal pay-offs in return for a deal that would allow his company to skirt union rules. Again the case never went to trial, but Mr. Shevell was barred for five years from engaging in union negotiations.

Despite these difficulties, Nancy gravitated toward the family business. According to the one and only interview she’s ever given, a 2002 sit down with the The Newark Star-Ledger, she loved it when her father brought her toy trucks as gifts. “I used to line them up in my room, right next to my Barbies,” she said, adding, “While other kids would go feed ducks at the park, we would go to my father’s truck terminals, to places like Pennsauken, every single weekend.”

A tomboy streak appears to have persisted into high school, where Nancy played for her school’s all-girl football team. Her interests, as listed in her 1977 yearbook, were skiing, flying, Vermont and, curiously, “boobs.” She went onto Arizona State University, where she majored in transportation—the only woman to do so at the time—and met her ex-husband, attorney Bruce Blakeman, with whom she has a son, Arlen, 19.

Mr. Blakeman couldn’t offer a sharper contrast from her current beau. A die-hard Republican who challenged Kirsten Gillibrand in 2010, Mr. Blakeman is probably best-known for an eccentric political ad which featured a “pitch” from his talking pet dog during a short-lived campaign for mayor in 2009. When contacted about Ms. Shevell’s wedding plans, he was gracious. “I wish Nancy and Paul well, and that’s it. Nancy’s a great mother, and Paul treats my son very nicely.”

Ms. Shevell joined her father’s company in 1983, becoming VP for administration in 1986. As a woman in an overwhelmingly male industry, she was put through her paces. In The Star-Ledger, she recalled one dramatic throwdown with a colleague, adding pointedly, “I don’t know where he is right now but I know where I am.”

Ms. Shevell was appointed to serve on the M.T.A. board in 2001 by then-governor George Pataki, an unpaid post. Though her 10-year tenure came to an end in June, so far no seems to be in any rush to replace her.

According to other board members, Ms. Shevell is well-liked by her colleagues, despite having missed a number of the monthly meetings and openly texting in others. She breezes through her agenda items with a certain practiced efficiency and a firm grasp of Robert’s Rules of Order. Eschewing a driver, Ms. Shevell generally takes the bus to M.T.A. meetings, traveling down Fifth Avenue from her apartment on East 83rd Street. Noted one former board member, “She would talk a lot about bus bunching on Fifth and the fact that the subways are so crowded during rush hour.”

Which isn’t to say she’s been a champion of commuters during her years on the board. “She plays for the company team,” said Gene Russianoff, longtime spokesperson for the Straphanger’s Campaign. “During her tenure as bus committee chairman, they eliminated 570 bus stops, which led to worse service. She didn’t publicly fight the budget cuts. She’s not a thorn in the side of the M.T.A.”

The origin’s of the couple’s romance are murky, despite the efforts of some of Fleet Street’s finest news hounds. (Indeed, Sir Paul, dubbed Macca by the British papers, recently suggested he may have been voice-mail hacked.)

Reportedly, their acquaintance goes back some 20 years, due to the  proximity of their weekend homes in the Hamptons. (Ms. Shevell’s East Hampton residence, valued at $8 million, is said to be far nicer than Mr. McCartney’s Amagansett getaway.)

Their romance first became public in 2007, when The Sun reported that they’d been spotted at a South Fork sushi spot. Afterward, the story noted, “Macca put his arm around Nancy after he drove her home—and they kissed tenderly.” Ms. Shevell was legally separated at the time, and Mr. McCartney was busy disentangling himself from his troubled romance with Ms. Mills.

Bronco, and another jaunt to Anguilla after the deaths of Nancy’s older brother, Jon, from a drug overdose, and Neil Aspinall, the Beatles’ road manager.

The couple’s engagement was announced on May 6 of this year. The wedding will be in London—a low-key affair (as these things go) with just a few friends and family members present.

And after that? Ms. Shevell has been quoted by The New York Post as saying that she’d love to live here in New York but that they would most likely wind up in England. That’s where the story may diverge from the usual fairy tale. Despite Sir Paul’s fortune of well over a billion dollars, he is famously stingy. (A source close to the couple noted with an eye-roll that during the couple’s courtship, Nancy always bought her own plane tickets to the U.K.) His estate in Peasmarsh, Sussex, might be set on 1,500 acres for privacy reasons, but it’s no palace by any stretch. Moreover, it’s isolated. Ms. Shevell can anticipate a lot of nights watching the telly.

And when she does go out, sources say, she will have her work cut out for her. “Confident, independent women who come over here with money will not have many friends,” warned Helen Kirwan-Taylor, an American journalist whose husband runs a hedge fund in London. “The last thing you can be here is threatening to other women. The things that open doors in New York shut them in England.”

After the M.T.A. meeting, Ms. Shevell told The Observer that she didn’t understand what all the fuss was about. “It’s just not that intriguing,” she said. “Not like his last marriage, which was really intriguing. I’m over 50. I work. That’s it. I haven’t been social and I have a small group of girlfriends. There really isn’t much to talk about.”

She smiled, pushing through the door out to Madison Avenue—presumably late for a bus. 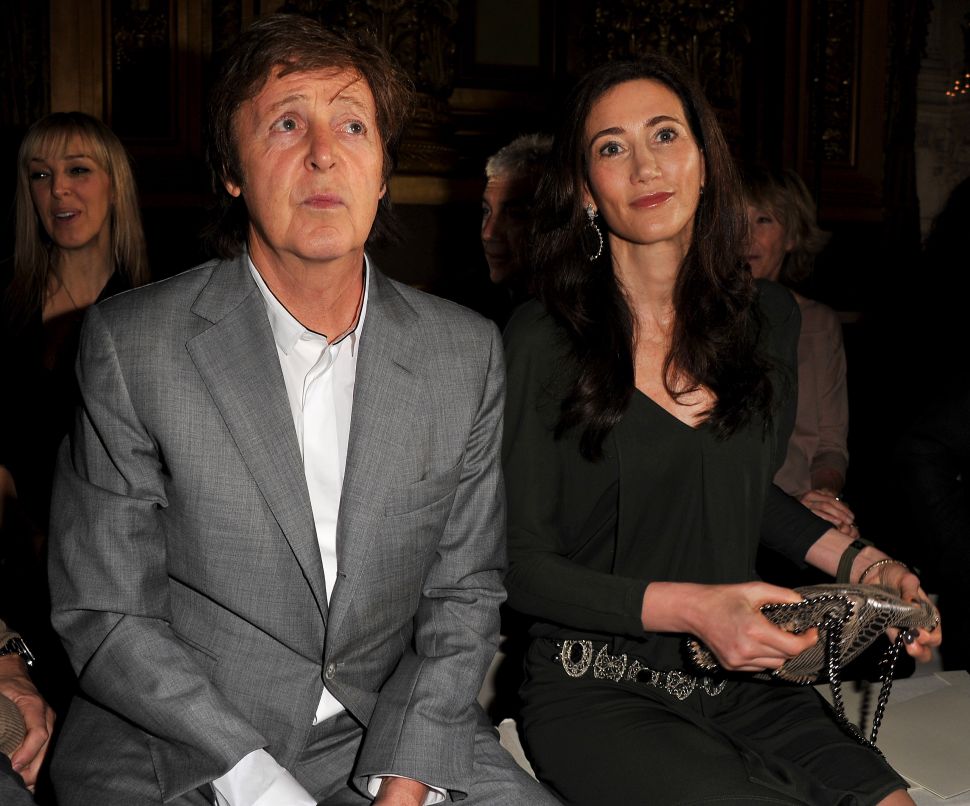