Since the statewide GOP establishment hasn’t embraced her specific campaign with big money, Dittman has early eked out a scrappy GOP operation, courtesy of the Middlesex County GOP and friends.

“We called over 500 people,” said Dittman, who made phone calls all day from the county party’s New Brunswick headquarters.

He admitted that while the state GOP hasn’t contributed any money to the cause, “It’s on their radar screen,” and Dittman added that she has received “advice” from the state committee.

With whatever they can muster, Dittman and Thompson both said that as much as Buono wants to make her campaign about the record of Gov. Chris Christie, they intend to make it about what they read as Buono’s leftward-tilting legislative history.

“She’s going to have to worry about her record,” Thompson said of Buono. “The more attention she brings to Gov. Christie’s record, the more attention she brings to her own, and I think given that stark contrast, the voters are going to prefer Gov. Christie’s record, and his successful efforts to reform pension and benefits for the majority of the taxpayers.”

While Dittman said she respects Buono’s intelligence, she said her opponent is too entangled in her own ambition to properly represent the district.

“She doesn’t care about the seat,” said the challenger. “She wants to be governor.”

With the state party to date not contributing any money to Dittman, she has turned elsewhere for early support. Former 6th Congressional District GOP challenger Anna Little of Highlands, a Tea Party primary winner defeated handily in the general election by U.S. Rep. Frank Pallone, (D-6), is already playing a role in the campaign.

At their kickofff today in Edison, Buono and her running mates, especially Assemblyman Pat Diegnan, (D-18), fingered the Tea Party as the extremist downfall of the Republican Party, but Dittman doesn’t run from the group.

“I thank God for the Tea Party, which has helped remind the country that we are so far away from what our forefathers wanted,” said the GOP challenger.

Asked who she supports for president, Dittman said she likes Texas Gov. Rick Perry on the issues but concedes that ultimately she believes former Mass. Gov. Mitt Romney will have better financial connections to probably land the nomination.

Perry, she said, would be her first choice among the people in the race, however, “I would like either one of them with (Minnesota Republican Congresswoman) Michele Bachmann for vice president,” she said.

If Buono’s team is convinced those Tea Party loyalties will be enough to sink Dittman, Thompson said he’s witnessed too much corruption in the Middlesex County Democratic Committee to believe that at some point, somehow, it doesn’t stick.

“Look at their organization – it’s corrupt,” said Thompson. “Look at Joe Vas, John Lynch, Joe Spicuzzo – one after another. Consider the fact that I filed a complaint when the Millie Scott campaign last year used county property and vehicles. It’s ten months, and there’s not been a single hearing. That’s because the Democrat freeholders appoint the ethics board.”

Thompson said he intends to take his complaint to the state, and in the meantime, Team Buono will take the Tea Party to Dittman. 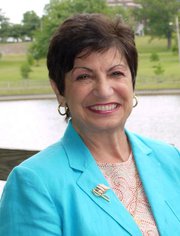