Responding to an email blast issued by the Lewis campaign, three sources said Jennifer Delany on July 7 sent the following response to the Democrat’s campaign: “Imagine, not having to pay NJ state income taxes…It must be nice. Imagine getting a court ruling overturned so your name could get put on the ballot. Imagine having dark skin and name recognition and the nerve to think that equalled (sic) knowing something about politics.  Sure, knowing someone with fat purse strings is nice, but you have no knowledge.

“Remove my email. To think you STOLE my email and name from a complaint letter. I’m reporting you as SPAM.”

Delany issued a statement this afternoon.

“I am deeply disappointed in my wife’s decision to send that email to Mr. Lewis’ campaign; it does not reflect my personal beliefs whatsoever,” said the former assemblyman from Lumberton. “In an attempt to repair the serious damage this has caused to our marriage, and to protect our kids from public humiliation, I decided to leave public life.  On behalf of my family, we sincerely apologize to Mr. Lewis for any pain this caused him.”

Since announcing his candidacy last spring, Lewis, a former resident of California, has struggled in the courts to prove residency here.

Just last week, Secretary of State (and Lieutenant Governor) Kim Guadagno wrote a letter to U.S. District Judge Noel Hillman notifying him of her decision to not certify Lewis for the general election campaign.

Sources said when the contents of his wife’s email reached him, Delany subsequently went to the Burlington County Republican Committee and said he would prefer to withdraw from the race rather than continue.

Not wanting to put his family through the matter if the Lewis campaign uncovered the item or used it in the campaign, and especially worried about the impact of the story on his children, Delany told party leaders he didn’t want to run, sources said. GOP Chairman Bill Layton and the upper echelons of the county committee “honored his issues by letting him go quietly.”

In a statement issued this afternoon, Layton said, “Former Assemblyman Pat Delany’s wife inexplicably sent an offensive and racist email in response to a routine email from Carl Lewis’ campaign; her actions were inexcusable.

“To his credit, Pat voluntarily disclosed the email to me after he found out about it.  In an attempt to protect his young children from a hurtful and embarrassing public spectacle involving their mother, Pat decided he would step down from the Assembly and not seek election to a full-term this November.  After much deliberation, I agreed to let Pat leave public life without disclosing the reasons for his sudden departure to the press beyond the fact that he was dealing with a serious family issue.  In this case, that issue was the severe damage done to his marriage in the aftermath of his wife’s decision to send this offensive email.  While it may have been politically expedient to publicly throw Pat under the bus, I believe letting him walk away quietly was the honorable, compassionate thing to do for someone who personally had done nothing wrong.

“At the same time, I was very clear with Pat from the beginning that if he chose to stay on the ballot, the Burlington County Republican Party would have withdrawn our support,” added Layton.  “The Burlington County Republican Party has a proud tradition of being the most inclusive, diverse Republican organization in the state and it’s something we are extremely proud of.  On behalf of the party, I offer Mr. Lewis our apologies for any pain this issue may cause him or his family, and we stand with all Burlington County residents who believe this kind of language has no place in society or in public discourse.”

Reached for comment, the Lewis campaign didn’t want to get embroiled in the story.

“We are in receipt of the email, but right now our focus is on campaigning,” said Lewis campaign manager Chris Walker. “It’s something we don’t want to give any comment on. We are focused on the campaign. We’re knocking on doors and we’ve been encouraged by the response of thousands of people to Carl Lewis.”

After announcing his decision late last month, Delany resigned from the Assembly on Aug. 12. Running for re-election in his stead is Burlington County Freeholder Chris Brown of Evesham. 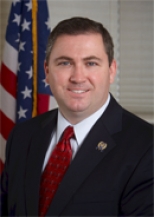