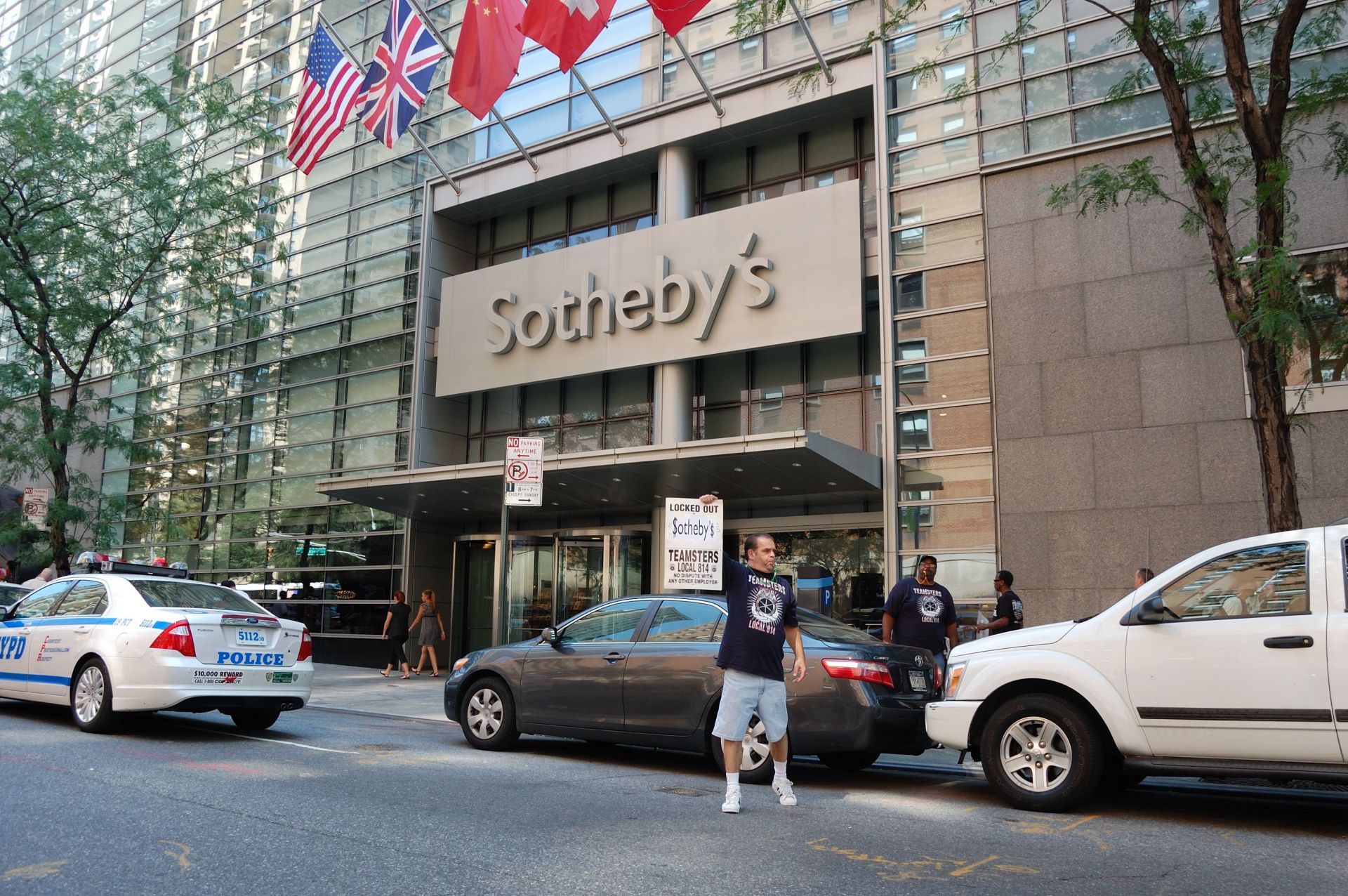 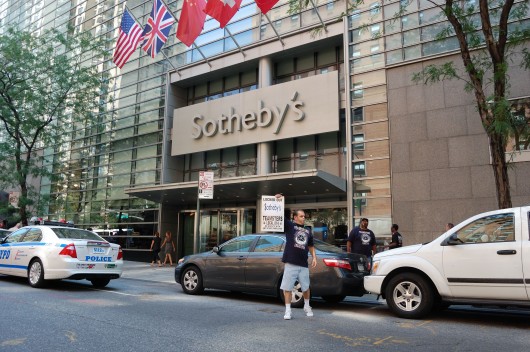 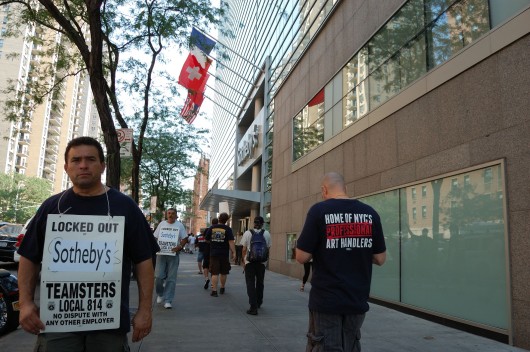 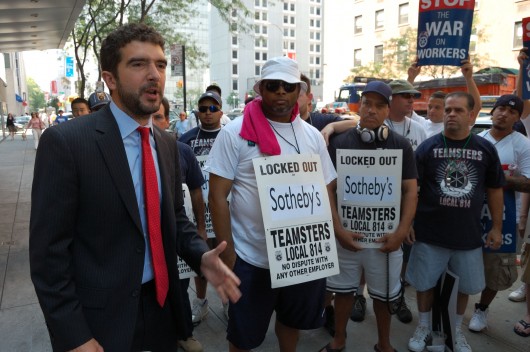 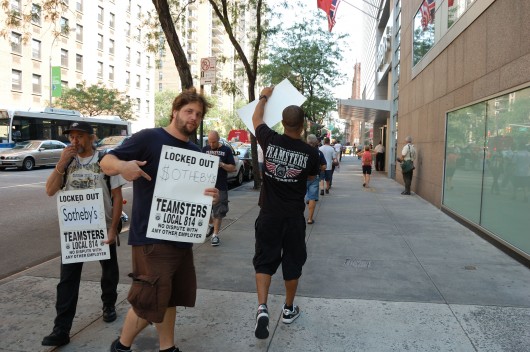 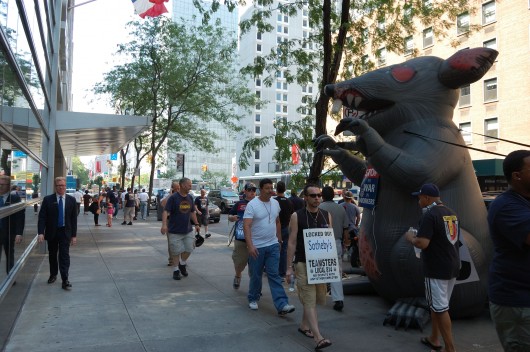 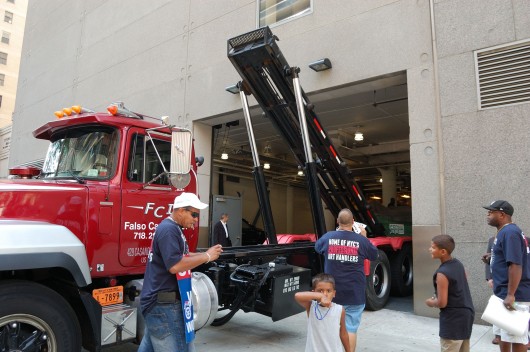 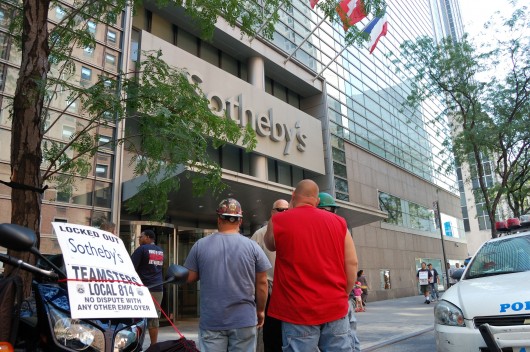 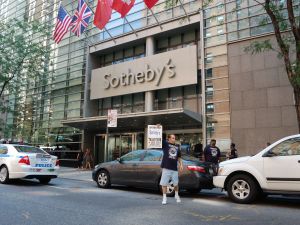 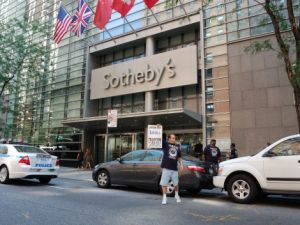 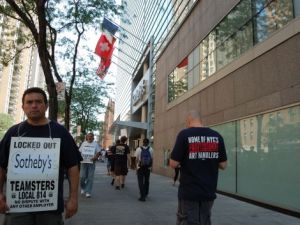 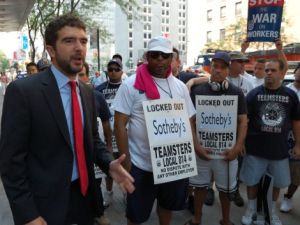 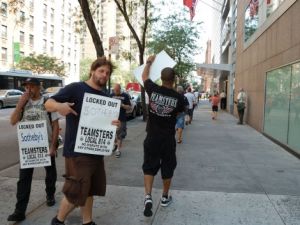 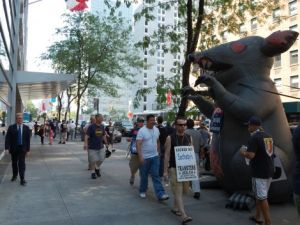 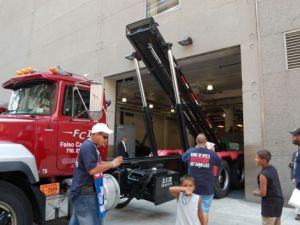 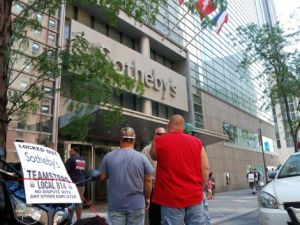 “How much for Jimmy Juggs’ job?” bellowed a bald man in sunglasses. Next to him stood a younger man in a hard hat, looking sheepish as his fist was held aloft by the elder man. On the far side of the pseudonymous Mr. Juggs stood an inflatable rat, all three reflected in the glass front of Sotheby’s Upper East Side headquarters this morning.

On both sides of them long lines of demonstrators walked up and down York Avenue, wearing purple union shirts, blowing whistles and holding signs — some with placards that designated them as Sotheby’s employees. There were around 50 demonstrators in total, and judging by the sound they made as they marched, the whistling to non-whistling ratio was something like 49:1.

A bystander pointed out that they couldn’t have picked a worse time to strike, since it was August and Sotheby’s really has very little use for them this month. But this was not actually a strike, it was a lock-out. Sotheby’s, playing hardball in their renegotiation of the union contract, handed out letters on Friday telling the 43 Teamsters Local 814 workers not to come into work on Monday.

Around the corner, Local 814 President Jason Ide, ran down the litany of indignities his art handlers had suffered at the hands of the Sotheby’s higher-ups.

“They brought in Jackson Lewis LLC for the negotiations; last time they had Morgan Lewis, which I know doesn’t sound like a big difference but it is.” Scruffy-faced and in a neat suit, the 30-year-old Mr. Ide ticked off the union’s issues on his fingers. “They’re trying to shorten the work week to 36 hours, which is an average of 2.5 hours per week, really harsh overtime cuts, they’re trying to replace us skilled workers with temporary guys, uh what else. Oh! This is really weird — I didn’t even know this was legal — they wanted us to waive our rights to report any legal violations on their part. As an individual you can’t file violations through the union, which is how we do things. Apparently they just want us not to be able to file them at all.”

For Mr. Ide the ignominy clearly hit close to home. He worked as an art handler at Sotheby’s for six years, and he said that he was a fully qualified preparator by the time he left.

“You can take that experience to a museum,” he said. “That’s why I like this job. But they’re trying to give it to temporary people, and deprive workers of this opportunity.”

A self-described “fighting Irish” handler of seven years,  Mark Keenan said the job had opened up whole new worlds for him.

“Jeff Koons,” Mr. Keenan said, when asked about his favorite artists. “Frank Stella, I’ve been in here until 2 o’clock in the morning installing some of his more intricate sculptures. I love it, I wouldn’t have it any other way.” He cocked his head in the direction of the building. “I shudder to think what’s happening in there now. It’s a complicated job. I’m still learning it, it takes time to learn.”

“We take care of Rembrandts, van Goghs and Picassos,” Mr. Ide yelled above the crowd during a speech just outside the entrance. “We’re highly trained. I’m convinced that if we stay out here and we fight and we let people know what’s happening here, we will prevail.”

After the crowd stopped shouting his first name, the workers resumed marching. Some returned to the incoming docks, where a red garbage truck was backing in.

“Scab!” yelled another, and threw a whistle in his mouth. He whistled hard, with his body, as if he was trying to point the sound into the building, where the driver was loading a Dumpster onto the back of the truck. The whistler’s two young sons, one in a cast, began tooting on their own noise-makers, eyebrows arched.

Blonde and sharp, Sandra Pope, currently running for Teamsters General president, approached the truck with Mr. Ide in a huff. She eyed the name of the company and began dialing the number below it. “It’s 813,” she said.

Mr. Ide shook his head. He was familiar with the shop, which is split between union and non-union workers.

“Looks like they sent a non-union worker today,” Mr. Ide told us, walking away from the truck with the workers to rejoin the march out front.

The Observer left without saying goodbye to Mr. Ide. He was otherwise engaged, busy chatting with four cops who were curious about how late the whistles would be going. Late, we heard him explain as we hailed a cab. Very late.