President Barack Obama’s favorable rating in New Jersey has dropped to 44 percent, down 11 points from April, while another 44 percent view him unfavorably, up 12 points, according to today’s Rutgers-Eagleton Poll.  Simultaneously, Gov. Chris Christie is mostly unchanged, at 45 percent favorable and 47 percent unfavorable, compared to 44 percent to 42 percent four months ago.

Even though the governor’s in a relative holding pattern, the results of the poll do show voter feelings about Christie leaning more negative than positive, a difference that is within the margin of error for the poll.

Forty-two percent of respondents said they would vote for Christie, while 49 percent would support someone else.

“The debt ceiling mess in Washington, along with the general economic malaise, has clearly taken its toll on how Garden Staters view the President,” said David Redlawsk, director of the Rutgers-Eagleton Poll and professor of political science at Rutgers University. “Particularly significant are drops among both independents and Democrats. After having a mostly positive view of Obama, independents have shifted distinctly negative, while Democrats have become far less positive as well. Given his easy win in New Jersey in 2008, these results are even more striking. At the same time, Gov. Christie’s prospects are also tough.”

In his poll, Redlawsk first addressed Obama, where much of the change in the president’s favorability stems from white voters.

The poll shows that more than half of whites (54 percent) view Obama unfavorably, while only 34 percent have a favorable view. Blacks remain strongly supportive, but even that support has slipped a few points, to 78 percent favorable and 12 percent unfavorable. Obama has lost support from both the middle and the left, with moderates evenly split 43 percent to 41 percent (compared to 58 percent favorable in April) and liberal support dropping to 71 percent favorable from 88 percent in April.

“Obama’s efforts to compromise appear to have not helped him in New Jersey,” said Redlawsk. “Conservatives and Republicans still overwhelmingly dislike him, while moderates have not been impressed, and liberals are getting frustrated. The result is an across-the-board decline. These numbers also certainly reflect the anger and frustration voters have with Washington. It’s worth noting that Congress’s rating is now only 14 percent favorable and 73 percent unfavorable in the Garden State.”

As for Christie, he hasn’t moved much, according to the poll, although the new results show a small increase in unfavorablity.

Results are from a Rutgers-Eagleton Poll of 615 registered voters conducted among both landline and cell phone households from Aug. 9 – 15, with a margin of error for the full sample of +/- 3.9 percentage points. 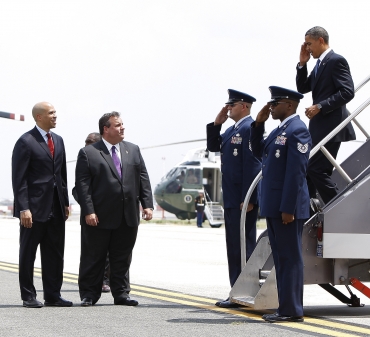