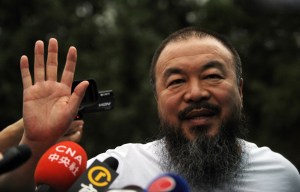 Lu Qing, wife of the Chinese artist Ai Weiwei, has written a letter urging Chinese lawmakers not to pass a measure that would cement the police practice of holding dissidents in secret locations without telling their families. An outspoken critic of government censorship, Mr. Ai was himself held in detention for 81 days this past spring for alleged economic crimes like tax evasion.

“If the above measures are passed, it will be a regression for China’s legal system, the deterioration of human rights, and will be a hindrance to the progress of our civilization,” Ms. Lu wrote, according to Reuters. The letter was posted on Mr. Ai’s Google Plus account, and is not expected to have much effect on China’s rubber stamp parliament.

Mr. Ai was told that he could no longer use the Internet or grant interviews under the terms of his release this past June, though he’s still managed to stay ubiquitous since then, and even wrote an essay about his detention for Newsweek.