TRENTON – The empty brown bags on the plaza in front of the Statehouse were meant not only to be interesting to passersby in the state’s capital.

They also were intended to send a message that more needs to done to provide nutritious food choices to communities that lack them.

The American Heart Association tried to drum up support by residents to sign a petition for the Fresh Mobiles Act (A3688), which would enable traveling farmers markets to be set up in the 134 areas of the state the federal government recently declared as “food deserts.”

The legislation, sponsored by Assemblyman Gilbert “Whip” Wilson and Sen. Donald Norcross (both D-5), passed the Assembly, but has yet to pass the upper chamber.

Food deserts are towns or areas, largely urban ones, that lack close proximity to food markets and are often dominated by relatively unhealthy fast food outlets.

Kevin Spaeth, a communications director with the AHA, said the legislation will encourage more healthy eating habits if farmers markets are allowed to be set up in the communities that lack them.

The vendors would be required to accept food stamps or other government assistance that residents receive to help buy food.

The Agriculture Department would need to select three cities to set up the mobile farmers markets within 120 days of the law’s enactment, the bill states.

The empty paper bags had the name of a county taped on it, and the number of towns or areas within the county that have food deserts.

To encourage healthy eating habits, passersby were able to treat themselves to apples, raisins, carrots and various vegetables

Norcross, in a prepared statement, said all residents deserve access to nutritious food.

“In many of our cities, you can find candy bars at convenience stores on every corner, but a head of lettuce or a stalk of celery is a bus ride away,” Norcross said.

“We need to do better for our residents by providing reasonable access to nutritious options in all of our communities. This program would be an extraordinary step forward in the effort to make fresh produce available in cities statewide.”

Lynne Richmond, a spokesperson for the state Agriculture Department, said the department supports the concept of mobile farmers markets. 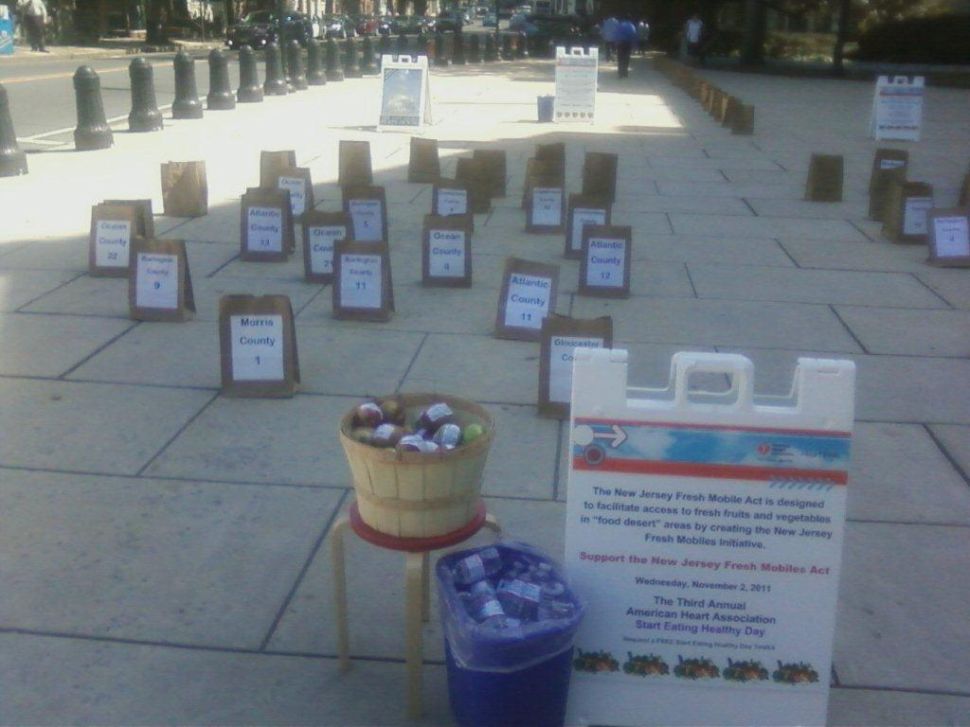