The Quad Cinema in Greenwich Village was nearly empty at 9 p.m. last Friday night, save for an old black man wearing a shirt emblazoned with the letters “BF” and a ratty orange hat that said “Big Day Out.” He was sitting in the middle of the lobby, serenading a handful of fans with an X-rated parody of “Hello Dolly” in which “It’s so nice to see you take a douche again …” was the only printable phrase of the song. This was R&B songwriter Clarence Reid, but soon enough he would don the sequined cape and mask of his doppelgänger, and when several members exiting the theater from another show filed past they would look at him warily, as if this crazy guy in a sparkly, befouled outfit might follow them out the door asking for money. In reality, they should probably be asking him for something—the autograph of the infamous Blowfly.

Mr. Reid is one of the more influential figures in rap, but few hip-hop fans have ever heard of him. Under the guise of his supervillain persona Blowfly, the Georgia-born 60-something spent the ’70s and ’80s sing/talking some of the most vile lyrics that were ever put on record. He is also, many believe, the originator of rap, having written his underground hit “Rap Dirty” in the late ’60s or early ’70s (the date is a matter of heated controversy), and his fans include musicians from Ice-T to Flea of the Red Hot Chile Peppers. Beyoncé has sampled the music of Clarence Reid, the Avalanches have sampled the songs of Blowfly.

Mr. Reid was in town for the weekend engagement, at the Quad Cinema, of a new documentary by Jonathan Furmanski, The Weird World of Blowfly. The film follows Mr. Reid on tour as he struggles to maintain relevance in a world where it’s no longer particularly transgressive at all to “rap dirty.” Mr. Furmanski spent four years on this project, and the fans who’ve turned out for the screening appear equally devoted to their musical idol.


As is often the case with superheroes and their mild-mannered alter egos, Clarence Reid and Blowfly seem conceptually at odds with each other: one swore off smoking, drinking and whoring around while writing songs for K.C. and the Sunshine Band; the other became an underground legend by rapping the most smutty lyrics imaginable to the tunes of songs like Elvis’s “Love Me Tender” (reimagined as “Suck Me Tender”).

At one time, keeping those two identities separate was a necessity: when Mr. Reid started performing as Blowfly in the ’70s, he had already made his name writing “clean” soul and pop music for Henry Stone’s TK Records. His first “dirty” album, Weird World of Blowfly (1971) was self-produced on his own label because it was too controversial to be released on Mr. Stone’s. The album contained sexually explicit parodies of songs that were in the same soul-pop genre that Mr. Reid was writing hits for at the time, including “My Baby Keeps Farting in My Face” and “Shitting on the Dock of the Bay.” The same year Blowfly made his vinyl debut, you could turn on the radio and hear Betty Wright singing “Clean Up Woman,” written by none other than Clarence Reid. Two years prior, Mr. Reid’s “Nobody but You, Babe” was a Billboard Top 40 hit.

Even though he’s a cult phenomenon, fewer than 15 people circled for an autograph or a photo before the screening. In terms of press … well, we’re it. He introduced himself by grabbing our hand and manipulating our fingers until only our middle finger was raised, pointing at him. And then for 20 minutes we sat next to Clarence Reid, an old man who raps more than he talks, and whose train of thought often wanders into bits of old songs, either his own or dirty versions of others.

When the cameras came out, we helped him pull on his Nacho Libre-style mask, and the transformation to Blowfly was complete. The moment felt sacramental as the mask was adjusted and Reid/Blowfly’s rheumy eyes stared out at us. Later we learned that Clarence Reid has worked as a minister and is a devoutly religious man who carries around a Bible with him most of the time.

When did Blowfly officially shed the cocoon of Clarence Reid? Maybe it was when TK Records went bankrupt in the ’80s. (Note that label’s last album was Weird Al Yankovic’s Another One Rides the Bus, which took a page directly out of Blowfly’s song parody book and cleaned it up for mass consumption.) Or when he started a public feud with the Sugarhill Gang and Dolemite by claiming that his single “Rap Dirty” was first recorded in the ’65, thereby earning him the title of the world’s first rapper? (There is, sadly, no proof: while “Rap Dirty,” renamed “Blowfly’s Rapp,” appears on the 1980 album Blowfly’s Party, released one year after the Sugarhill Gang made “Rapper’s Delight,” Mr. Reid and Henry Stone both claim that there is a 1965 recording of the song, but hard evidence remains elusive.)

Or did Clarence Reid officially cease to exist in 2003, when the artist—totally broke and desperate for cash—sold for a pittance the rights to the 3,800 songs he had registered with B.M.I., thus allowing his work to be sampled free of royalty charge by everyone from Wu-Tang Clan to Beyoncé? Suddenly Mr. Reid’s music could be taken by any other artist and used in whatever way that artist wanted while the composer scraped together a living off his social security income. Clarence Reid’s life was a music industry cautionary tale. Blowfly invented rap. Which one would you choose to be?

It’s been decades since Clarence Reid had to separate himself from the Blowfly persona, and its unclear if he would even be able to at this point. The film includes old photos of Clarence Reid wearing a suit and smiling with his ex-wife that are impossible to identify as the man sitting in the front row of the theater, loudly asking the director of his own documentary if the movie is over yet. Even without a mask or a cape, Mr. Reid still grows out his nails, raps dirty to anyone within earshot and gives the world the middle finger. Maybe it was Mr. Reid who was the alter-ego for Blowfly the entire time (his brief flirtation with normalcy left him with an ex-wife and two children with whom he has little contact). Blowfly, it seems, is happy being Blowfly all the time—though he will respond when his publicist refers to him as Clarence.

Still, it’s impossible not to pick up on the surreal cognitive dissonance his appearances produce: Blowfly’s most dogmatic fans were also the ones who seemed least comfortable in the presence of the old, smiling man with the creepily long fingernails. Sean, a middle-age, blond surgeon, plastered on a smile while Blowfly autographs something for him, later gushing about his introduction to Blowfly’s albums as a kid in his parent’s basement. A Connecticut restaurant owner named Joe fidgeted awkwardly next to Blowfly while the older man rapped a profane curse against everyone present, promising that in several days we would wake up to find a penis where our vagina used to be or vice-versa. Joe too was much more comfortable talking about his obsession with Blowfly than he was actually being around him.

Blowfly’s fans didn’t come across as star-struck: the room’s mood was more like the disquieting mix of respect and guilty repulsion one might feel in the presence a quadriplegic war hero. Blowfly, for lack of a nicer way to say it, smelled very strongly of urine. He cackled and drooled. He gave everyone the middle finger (that’s also his signature stage move), revealing two-inch long yellow fingernails. He may be the first rapper in history, but sitting next to him, The Observer began to feel uncomfortably complicit in an exploitative freak show. It may be worth mentioning at this point that the audience for the screening was approximately 90 percent white, which brings up an unavoidable association with minstrelsy.

That may sound harsh, but consider Mr. Reid’s own confession in the film, that as a child he would come home from a day picking cotton with upwards of $30 in his pocket, the extra money given to him by white supervisors who thought his rendition of Ernest Tubb’s “I’m Walking the Floor Over You” as “I’m Jerking My Dick Over You” was hilarious. Playing up to a white audience appalled his grandmother, who considered him “nastier than a blowfly.”

It’s hard to say what Mr. Reid makes of all this. When we tried to ask him how he feels about his predominantly white audience, he rapped about the size of his penis and its various effects on women and gay men. A question about the last time he was in New York led Mr. Reid to tell a story about James Brown’s being in hell. Either he couldn’t hear any of the questions asked of him, or he didn’t understand them, or he simply chose to ignore them. Which might have been the best approach.

But no matter. The important thing is the Blowfly’s still at it, still giving his fans the middle finger from the stage, still buzzing. 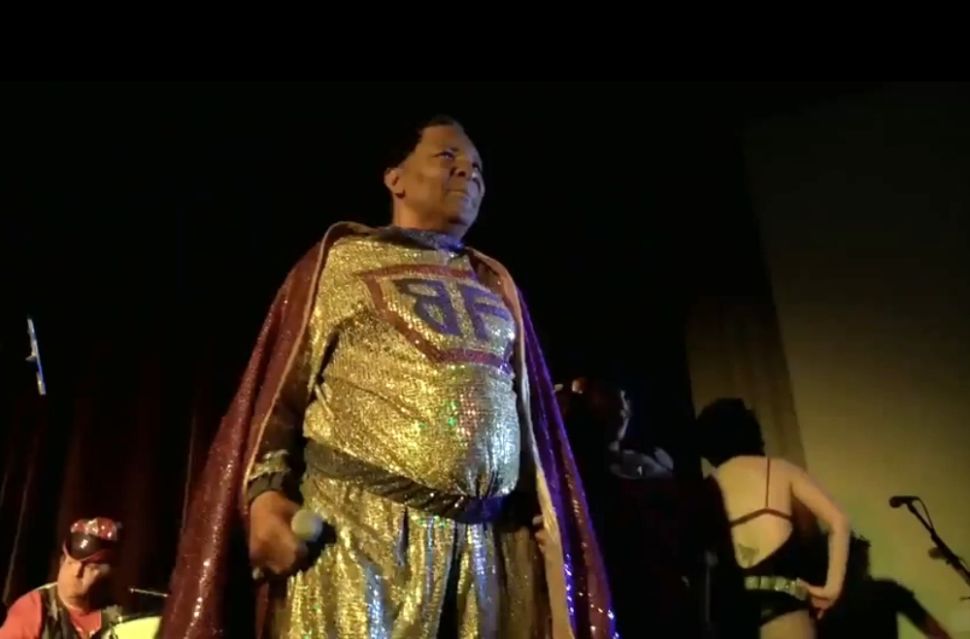