EDISON – He calls himself the anti-Christie, and he came here today to help heal a wounded party organization, still suffering the after-effects of a bruising brawl – not of Christie’s so much as of its own intra-party making – or undoing.

The fight also happened to feature the back channel politicking of at least two prospective gubernatorial candidates.

But Malloy wasn’t interested in Democratic Party fisticuffs within its own ranks.

“We face a lot of the same problems,” Connecticut Gov. Dan Malloy told PolitickerNJ.com between flashbulbs in the backroom of the Pines, pausing while handlers seized another coterie of political insiders who wanted their picture with the Northeast Democratic Party leader.

“I’m not here because Gov. Christie’s the governor,” Malloy added. “I have mutual friends with the chairman who asked me to be the speaker.”

In balancing his state’s budget earlier this year, Malloy famously took a different tack than his NJ GOP counterpart and taxed the rich, a philosophy President Barack Obama emphatically expressed agreement with today in a Rose Garden speech.

“How else are we going to get out of this crisis?” Malloy wondered. “We’ve already cut billions out of discretionary spending.”

Democrats talked up Malloy as the perfect antidote to the sitting New Jersey governor whose tough guy politics have sent them into disarray.

“Well,” Malloy said in the crowd of friends, “I don’t want to get in a fight with the guy.”

State Party Chairman John Wisniewski formed one half of a Democratic Party county fight that pitted him against state Senate Majority Leader Barbara Buono (D-Metuchen), another potential 2013 challenger to Christie.

“He shows the way it should be done,” Wisniewski said of Malloy. “The contrast couldn’t be more striking.”

Any lingering bad feeling among Democrats here in Middlesex wasn’t on display publicly at a packed event at the Pines complete with a live Big Band, as Democrats welcomed Malloy to keynote and former N.J. Gov. James Florio to introduce U.S. Rep. Albio Sires (D-13).

Part of the other back story here tonight included the arrest on corruption charges earlier this year of former Middlesex County Democratic Chairman Joe Spicuzzo, a sheriff who allegedly traded jobs for cash.

A retired FBI guy, Barnes came in to blunt the bad vibes around his predecessor.

State Sen. Bob Smith (D-Piscataway) used the optics of the biggest room at the Pines bulging to capacity to make an animated statement to a roar of applause.

“This is a group that is fired up and ready to crush the Republicans,” said Smith.

In his address to the organization against the backdrop of clinking silverware as Democrats sawed into chicken entrees, Malloy said he was more than happy to honor the request of Barnes to come and speak. He also gave a shout-out to Piscataway Mayor Brian C. Wahler, a friend of his going back to the U.S. Conference of Mayors.

And he went after the GOP jugular.

“Our president didn’t ruin this economy,” Malloy shouted to applause. “George Bush and the Republicans ruined it. This president has inherited this economy. The Republicans are saying all we have to do is trust them again. It is, in fact, trickle down economics (that guides them). They intend to dismember the safety net. They don’t care about working men and women and working families. The Republican play book is all about cutting the safety net and tax cuts for the rich. They don’t believe in shared sacrifice.

“This is no longer than Republican Party of Lincoln. It is a party following the lead” of the Tea Party,” the governor added. 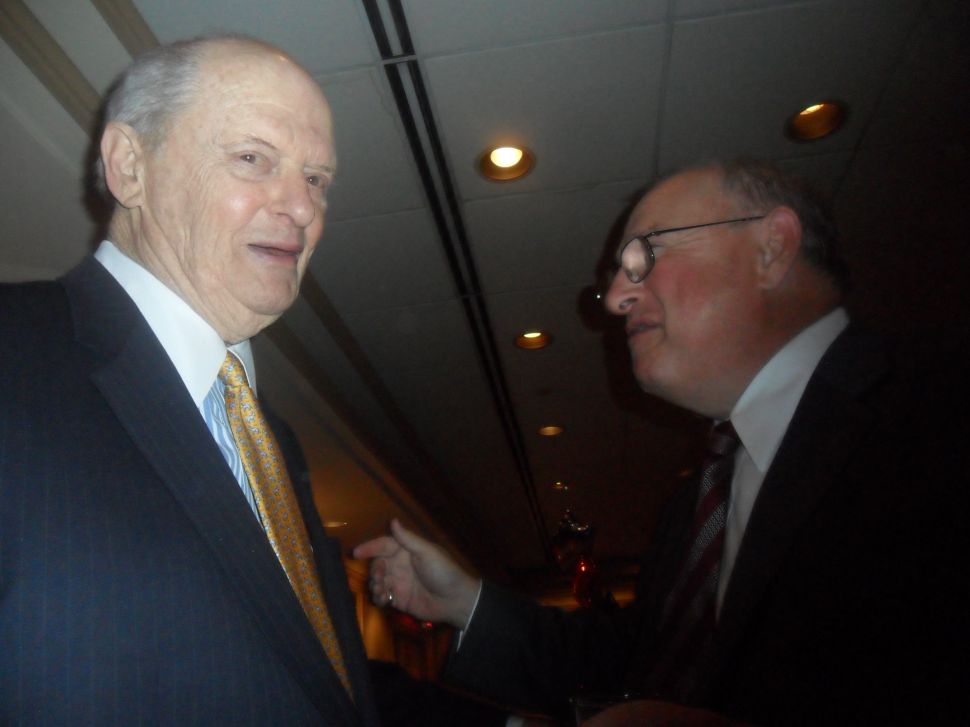