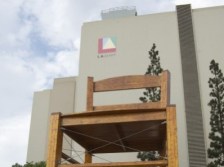 “No one likes to go downtown,” a Los Angeles dealer told us plainly earlier this week. “No one.”

The gallerist, who asked for anonymity to avoid causing offense, was discussing fair company Merchandise Mart’s decision to house its new art fair, Art Platform, on the second floor of L.A. Mart. It’s a nondescript white building, not far from the L.A. Convention Center and the Staples Center, the home of the Los Angeles Lakers.

Would collectors be willing to brave the traffic to visit its 70 international exhibitors?

At 2 p.m. today, the scheduled opening time for VIPs, BMWs and Benzes were arriving at the L.A. Mart at a steady clip. They idled in line for valet service—an affordable $12—and then rode elevators to the second floor, the home of the fair. Upon arriving, a good number cut straight to the VIP Lounge, picking up flutes of champagne before wandering the aisles.

The fair is laid out as a grid, but it has a bevy of thoroughfares and booths that are open enough that it is possible to wander freely among them, avoiding the dreaded experience of seeing the same people over and over again. It is, in other words, thoroughly functional, but with its low ceilings and lack of visible landmarks, it is far from elegant or sexy.

Two hours into the fair, red dots began to appear next to works. New York dealer Michael Rosenfeld sold a wall relief by the veteran California artist Betye Saar for $35,000, and he had plenty more on offer, having devoted his entire booth to her work, most at prices between about $15,000 and $50,000.

Minneapolis-based Weinstein Gallery sold two photos by Alec Soth—one each from his “Fashion Magazine” and “Niagara” series—for prices in the $20,000 range. “They’re among his best known images,” a gallery rep told Gallerist. She was unsurprised they had been snapped up so quickly: they were were nearing the end of their editions.

With many of the biggest Los Angeles names sitting out of Art Platform—David Kordansky, Honor Fraser, Regen Projects and Blum & Poe, to name four—it was perhaps no surprise that major six-figure works were few and far between, though L.A.-based Daniel Weinberg Gallery had one in the form of a choice 2003 John Wesley painting, called Dr. Interrupted. Its price: a cool $200,000. (With booths going for $8,400 to $37,600, depending on size, such a sale could go a long way in covering expenses.)

Running into a colleague, we offered that it seemed relatively crowded. The swilling masses had made their way to the far corners of the fair, we noted. People were placing holds, buying works—at least lower priced ones—and the crowd was growing. He was less impressed. “It doesn’t feel that crowded,” he said, looking around.