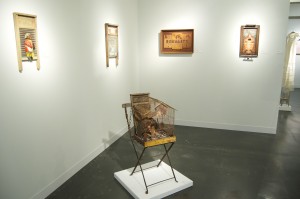 The art world prizes youth. It wants the next new thing, the hot young artist.

Occasionally, though, there are surprises. Take the case of Betye Saar, the 85-year-old African-American artist, whose career may be reaching its highest point ever at just this moment.

“I think she’s involved in something like eight separate exhibitions right now,” New York dealer Michael Rosenfeld told us as we sat in his large booth at the Art Platform fair in Los Angeles.

An integral member of L.A.’s artistic community for decades, her work is now on view in shows in L.A. at the Hammer Museum and at Roberts & Tilton Gallery, which recently published L.A. Object, a massive tome about black artist in Los Angeles that features Ms. Saar’s work.

Mr. Rosenfeld has filled his booth with a small trove of her works, a miniature retrospective that spans more than 30 years of her career. (“We didn’t bring any ’60s work because it’s so rare, and most of it sold long ago,” he explained.)

There are wall-hung assemblages—metal washing boards touched with paint or laden with sculptural caricatures of black people—and there are standing assemblages made from bird cages and chains and dolls. Most works range from about $15,000 to $50,000. An hour into the opening, one had already sold.

Seeing her work, one thinks of Joseph Cornell and Ed Kienholz, and it shares those artists’ knack for crafting a gently worn, dilapidated beauty, but it is warmer than those examples. It embraces the more positive aspects of nostalgia.

“I fell in love with Betye’s work about 20 years ago,” Mr. Rosenfeld told us. “I was collecting her work personally, and when I traveled to Los Angeles we met.” He helped place her work in the collections of the Metropolitan Museum of Art and the Whitney, and began representing her in New York. “Some people came by and told me that MOCA does not own a Betye Saar,” he mentioned. “Maybe this will help correct some of the—I won’t call them mistakes—oversights.”

This is the dealer’s first art fair in L.A., but he said that the time seemed right to give the city a try. “The art world is focusing on Los Angeles artists,” he said, referring to the Getty’s “Pacific Standard Time” initiative. “How could I not celebrate Betye Saar?”