The committee voted 5 to 2 to dismiss the charges filed last year by Wayne Township resident William Brennan alleging Rumana had violated state law when he attempted to advocate before a state agency on behalf of a non-profit of which he was chairman of the board.

For a decade, Rumana has been working to bring an energy co-generation plant to Wayne, where he served as mayor prior to joining the state Assembly.  As part of his attempt, Rumana founded the Wayne Energy Corp., a non-profit with the goal of shielding the township from any liability from the creation of the co-generation plant. As chairman of the board of the WEC, Rumana attended a 2009 hearing of the state Board of Public Utilities in order to advocate for WEC.

BPU counsel asked Rumana to leave the meeting because of the potential conflict of interest.  During the process, Rumana also placed a phone call to a state Department of Education employee to talk about the co-generation plant.

The board had considered charges against Rumana that his actions presented an appearance of impropriety, but voted against issuing the charges.  The board then voted to dismiss Brennan’s complaint.

“I am gratified by today’s decision to dismiss the complaint,” Rumana said in a statement.  “The ruling today demonstrates that I did not violate any ethical standards.”

Two members of the board took exception to a letter they said Brennan and Wayne resident Rob Burke sent to the board alleging that some members were not acting above board in their opposition to his complaint. Brennan had asked Commission Chairman Alan Rosenthal to recuse himself because of earlier comments Brennan said he made inidicating that Rumana had done  nothing wrong. Judge Neil Shuster called the letter inappropriate and not factually based.

“I find very offensive the allegations communicated to us in the letter from Mr. Burke and Mr. Brennan,” he said.

Judge Daniel Mecca took a shot at Brennan’s pursuit of a law degree, saying that someone in law school should have some grasp of the First Amendment.

“Their suggestion that members of this committee should be silenced because they perceive them to be disagreeing with Brennan and Burke I find to be reprehensible,” Mecca said.  “Especially in the case of Mr. Brennan who is a law student and should have at least a passing knowledge of the  constitutional guarantee of freedom of speech.”

Reached by email for comment after the vote, Brennan said the committee is now “batting 1000.”

“Well they kept their record intact, having never found anything done by any legislator to be unethical (including acts that landed legislators in jail). I guess I shouldn’t be surprised,” he said. “This says as much about the integrity of that Committee as it does about Rumana. ”

Brennan is a candidate for the state Assembly in  the 40th District, running against Rumana. 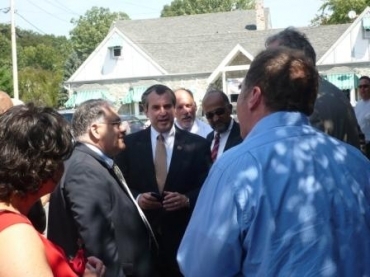