(This page is not all inclusive and will be updated as events occur. Have a suggestion? Leave it in the comments!)

As the protests gain momentum, more and more famous names have been stopping by to check out the action and express admiration for the “Occupy Wall Street” cause…whatever it may be.

1. Lupe Fiasco:
The rapper was one of the original supporters of the protests, and was even down at the march on September 17.

2. Michael Moore
The longtime gadfly turned up at Liberty Plaza on September 26 and used the “human microphone” technique to talk about corruption on Wall Street.

Now he’s on a media blitz, talking up the Occupy Wall Street protests and arguing that they weren’t given the same attention as the Tea Party protests.

3. Russell Simmons
Went to Liberty Plaza on Thursday with 500 bottles of , calling the protesters “sweet kids.” Does not officially identify with Occupy Wall Street, but supports the concept. He explained to the Observer his support, “We should stop the legal bribery of our politicians.”

4. Noam Chomsky
The professor offered a strong message of support, which was published on OccupyWallStreet.org’s site:

“Anyone with eyes open knows that the gangsterism of Wall Street—financial institutions generally—has caused severe damage to the people of the United States (and the world). And should also know that it has been doing so increasingly for over 30 years, as their power in the economy has radically increased, and with it their political power. That has set in motion a vicious cycle that has concentrated immense wealth, and with it political power, in a tiny sector of the population, a fraction of 1%, while the rest increasingly become what is sometimes called “a precariat”—seeking to survive in a precarious existence. They also carry out these ugly activities with almost complete impunity—not only too big to fail, but also “too big to jail.’

The courageous and honorable protests underway in Wall Street should serve to bring this calamity to public attention, and to lead to dedicated efforts to overcome it and set the society on a more healthy course.”

5. Cornel West
Joins protestors on September 27 for a speech.

He also held up a sign reading, “If the war on poverty was a real war we would actually be putting money into it.”

6. David Paterson
The ex-governor has said the protests are very well-organized, but still won’t actually say he supports the movement. 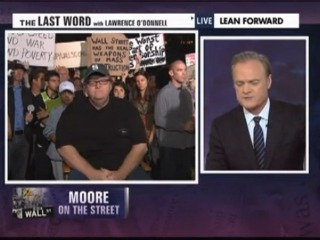